SoftBank has revealed its plans to sell $41 billion worth of assets and buy back $18 billion of its shares in a bid to firm up its financials as the coronavirus continues to negatively impact the company’s share price.

The company’s share values have halved over the past month, and the firm already carries a heavy $55 billion in debt. 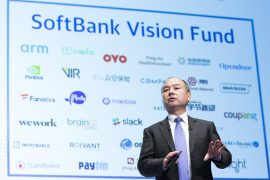 Its Vision Fund investments in ride-hailing and hotel groups are also continuing to dive, as Oyo Hotels reduces its Chinese workforce and Improbable Worlds’ operating losses jump by almost two-thirds.

But its latest announcement seems to have had the desired effect so far, prompting the company’s stock to enjoy its biggest daily percentage jump in Japan since November 2008, shooting up 18.6%.

The planned sale and liquidation of assets will help the Japanese investment conglomerate repurchase $18 billion in stock and slash some of its debt.

It’s the investment bank’s second big buyback in the last month, after announcing it would buy back close to $5 billion worth of shares to help boost the stock price.

At $41 billion, the firm is now selling assets almost the equivalent size of what its entire market value was last week.

“This programme will be the largest share buyback and will result in the largest increase in cash balance in the history of SoftBank Group, reflecting the firm and unwavering confidence we have in our business,” says founder and CEO Masayoshi Son.

The assets on sale over the next 12 months have not been named, but analysts are drawing people’s attention to its $140 billion stake in Chinese Big Tech Alibaba, according to the Financial Times.

Whilst Son tries to convince investors that SoftBank is worth far more than its current stock price, some have decided to bet against its debt, putting greater pressure on the effectiveness of its buyback.

Apollo cited concerns about the Japanese conglomerate’s debt load and its exposure to cash burning tech start-ups, firm in its belief that the bonds are mispriced and should not be trading at investment grade levels.