Bank of England dips into US repo to lend banks $15bn

The Bank of England is lending out more than $15 billion to banks from its US dollar repo operations, the largest sum the central bank has issued since the financial crisis. 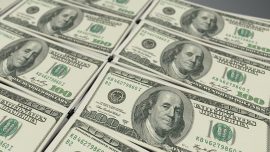 BoE dips into its US dollar repo operations

The figure was announced yesterday, according to Reuters, as the coronavirus outbreak worsens in the UK. Scientists at Imperial College London have called it the “most serious public health threat” in a respiratory virus since the 1918 flu pandemic – known as the Spanish flu.

In a bid to keep the country’s economy functioning, the UK’s central bank has lent out $8.210 billion of seven-day funds in its usual weekly dollar repo operation, but it has also issued a further $7.245 billion in a new operation for 84-day funds, part of new liquidity measures taken by various central banks.

Further records were made when the Bank of England lent out the largest sum of six-month sterling funds to banks since March 2016.

The new Bank of England Governor Andrew Bailey sent out a warning yesterday to those looking to make some easy cash off the back of an economy in decline.

In another interview with Sky News, Bailey hinted that “nothing is off the table”, even the radical move of printing more money.

“Everything is on the table that is reasonable, within the policy tool set,” says Bailey.