Starling Bank has won a deal to sponsor Team GB at Tokyo’s Summer Olympics later this year as it gears up its advertising efforts to become a household bank name, Sky News reports.

The UK challenger will be the British Olympic Association’s banking partner, but this is not the bank’s first stint in Olympic sponsorship. Last year, it chose to advertise at Archery GB’s National Tour Finals because its chief banking officer Helen Bierton is a former GB archer.

The bank has invested heavily in the Games this year despite growing fears that the event will be postponed due to the coronavirus, which has taken the lives of 3,200 people worldwide (at the time of publication).

Tokyo’s Olympic minister Seiko Hashimoto said this week that the Games’ contract only specifies that Tokyo needs to hold the event “during 2020”, suggesting it could be postponed until the end of this year. The Games are meant to be taking place from 24 July to 9 August 2020.

“We are doing all we can to ensure that the Games go ahead as planned,” Hashimoto adds. Under the hosting agreement, the right to cancel the Games remains with the International Olympic Committee (IOC) which has so far said the event is going ahead. 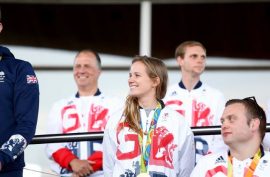 The IOC’s president Thomas Bach said the words “cancellation” and “postponement” were not mentioned in regards to Tokyo 2020 at the committee’s executive board meeting this week.

Starling’s brand presence at the Games will presumably be funded in part by its most recent funding round, which raised £60 million last month from existing investors Merian Global Investors and JTC.

The bank now has roughly 1.3 million customers, and will add to this count by offering every British athlete an account with £100 in credit.

Starling will join the Olympics’ banking sponsor wall next to UK incumbent Lloyds Banking Group, which advertised at the London 2012 Games.

“We feel extremely privileged to be the official bank of Team GB and will be sharing our excitement with customers in a number of creative ways over the next few months, which we hope will add to the feeling of community that the Olympic Games inspires,” Starling CEO Anne Boden tells Sky News.