Aruba, an island in the southern Caribbean Sea, has teamed up with Netherlands-based payment processor equensWorldline to switch its entire banking community from traditional batch payments to instant payments. 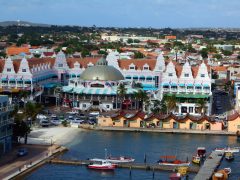 The Central Bank of Aruba (CBA) initiated the modernisation of the island’s payment infrastructure a few years ago. Part of the Netherlands, the country – which uses its own Aruban florin as currency – has four active banks on the island including Aruba Bank, Banco di Caribe, Caribbean Mercantile Bank and RBTT Bank Aruba.

Using the CBA’s clearing and settlement mechanism which was implemented by Worldline’s subsidiary equensWorldline, all interbank payments in Aruban florin can now be initiated instantly.

The digitisation of payments has been “a challenging project” according to the CBA. The central bank says one of the reasons for this was because “the entire banking community of all domestic and international banks in Aruba had to switch to instant payments in a ‘big bang'”.

Hence the island’s partnership with an established European payments player like equensWorldline, whose CEO Michael Steinbach calls the banks’ switch “an important milestone”.

“The market in which we operate is clearly no longer European, but global,” says Steinbach. “This project shows once again that instant payments are truly becoming the new normal, not only at European level but also on a global scale.”