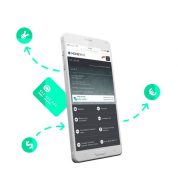 Moneykit offers banking without the need to visit a branch

According to a survey conducted by the bank, the top need for foreign residents was the ability to conduct everyday banking transactions without having to visit the bank in person.

Japan has an entrenched branch culture and remains one of the few countries where a majority of the population still do their banking by visiting a physical location.

“Sony Bank decided to establish a new English smartphone app that would take the hassle out of opening an account in Japan and allow account holders to make everyday banking transactions online,” the bank writes.

Moneykit will have a dedicated English smartphone application and Sony Bank is promising an account opening process which is “quick and easy, without the need for complicated paperwork.”

Founded in 2001, Sony Bank reports just over 500,000 customers. The bank is majority owned by Sony and its financial holdings group.