Standard Chartered has committed $75 billion towards sustainable development goals (SDGs). These include financing infrastructure services which help the environment, as well as funding services which facilitate renewable energy and clean tech projects such as solar and wind-powered initiatives.

Whilst infrastructure projects will get $40 billion, renewable energy and clean tech services will get $35 billion. The bank makes the pledges alongside the UN’s 17 Sustainable Development Goals set in 2015, and the Paris climate change agreement, signed in 2016, which aims to decrease global warming.

The bank, which has 60 offices, has also laid out a ten-year plan to reach net zero carbon emissions from its operations by 2030. “We know that the investment required cannot be provided by governments and NGOs alone, so it is critical that investors embrace the SDGs at pace and scale,” says Standard Chartered’s group head of corporate affairs Tracey McDermott, who also points out that the bank will be ceasing support for clients who generate more than 10% of earnings from thermal coal by 2030. 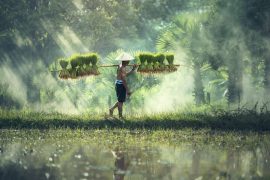 The majority of Standard Chartered’s profits currently come from Asia, Africa and the Middle East

Between 1990 and 2016, the world lost 1.3 million square kilometres of forest – an area larger than South Africa – according to World Bank. Despite the environment not being a top priority on banks’ agendas ten years ago, it has started coming to the attention of shareholders which in turn makes global warming a substantial risk for banks if they do not manage it.

The majority of Standard Chartered’s profits currently come from Asia, Africa and the Middle East. Since 2013, the bank began booking losses of roughly $400 million on a portfolio of loans hinging on risky diamond debt which had once been worth $3 billion. The bank eventually stopped financing diamond mining, which causes soil erosion and deforestation, in 2016 due to the amount of money it lost through it.

Read more: Why we need to persuade governments to tokenise the world’s forests

In 2015, the bank also stopped advising Indian conglomerate Adani on its huge Australian coal project which it had already poured $12 billion into. The proposed multi-billion-dollar mine, rail and port project in the state of Queensland is currently driving thousands of climate activists to protest around the world. A number of other international banks declared at the time that they were uninterested in funding the project, including Citigroup, Deutsche Bank and Morgan Stanley.

Standard Chartered is not the first to commit money to SDGs. Banco Santander announced its ten-year plan last December, which commits to raising a much larger $238 billion in green finance by 2030. Last August, CaixaBank announced it was rolling out 150,000 biodegradable cards each year, and in November Italian banking group Intesa Sanpaolo announced its SDGs which focus on financing business models designed to remove waste and reduce the use of raw materials.

Fintechs are also creating products off the back of the industry’s concern for the environment. Finnish fintech start-up Enfuce works with the likes of MasterCard, Visa and Amazon Web Services (AWS) to show millions of consumers how large their carbon footprints are on their purchases.

Similarly, sustainable banking service Doconomy has teamed up with Mastercard to provide banks such as US-based Bank of the West – a subsidiary of French banking group BNP Paribas – and Nordea with carbon tracking features in their banking apps.