New private bank 220, designed for YouTubers, high-net-worth youngsters and child stars, says it aims to be available for UK users by April 2020.

The strict criteria for joining the private banking community is based on your total value of assets, your “general good standing” – i.e. reputation, and your ongoing value as interpreted by the bank. It will also eventually work on a referral basis once the neobank is up and running, comparing it to London’s private members club Soho House which requires two referrals to get in. 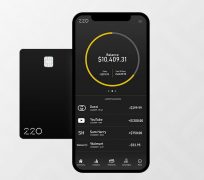 Currently in the process of applying for a banking licence, co-founder and CEO Henry Fudge tells FinTech Futures the team wanted to tap the Swiss market first, but changed to the UK for initial regulatory ease.

Fellow co-founder and COO Sam Harry is a YouTube gamer himself with 1.12 million followers on his channel ‘Chaotic’. He’s been gaming since 2011 and is now a gaming partner at Facebook creating the social media giant’s live gaming content.

“The problem is with the child star – they can print money like a central bank but they have no basic financial literacy,” says 23-year-old Fudge, who says private banks such as Credit Suisse and UBS have become more and more exclusive, meaning “if you’re only a single digit millionaire you just don’t get the service”.

Fudge says 60% of these well-established private banks’ customer bases are over 60, which means “these banks aren’t trying to target younger people, they’re just getting older”.

Chief marketing officer at 220, Tim Hyde, agrees. With previous experience developing performance marketing for Revolut and Starling, Hyde feels it’s down to a lack of financial education in British schools too.

“I’ve met people earning over six figures a year, not paying tax and none the wiser,” says Hyde, “it’s shocking, a lot has gone wrong to get to this point”.

Splitting dividends, cashflow management and fund allocation are all things Hyde has taught himself. He equates this to when he bought a house, having spent three months writing letters. “For someone who is digitally-minded that process has really stressed me out.”.

Instead of entering the saturated neobank market with a cost-volume business model, 220 will be targeting the richest youngsters in the UK, with plans to branch out to other countries eventually. It needs 10,000 customers by the end of next year to be on track with its growth targets, and aims for 400,000 users across Europe by its fifth year.

Calling private wealth management “the heart of banking”, co-founder Fudge says millennials are also set to inherit a record-breaking $68 trillion in the next 25 years. This is why Fudge says it’s “time to show them what premium is”. 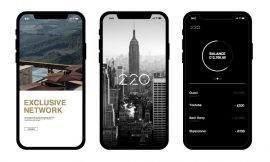 Premium means many things to 220. Full current accounts can be adorned with cards made out of anything from “gun metal black titanium” to 24 karat gold.

A robo-advisor will also accompany the most basic plan, charging a flat 0.5% in annual fees which Fudge claims is 14% cheaper than others in the market. “If you go with established wealth managers, 0.5% turns into 5.1% overnight because you made one special request.”

Financial planning is also a big part of 220’s model, and it can all be done through video consultations. The bank will work on a “completely paperless” basis and aim to turn around documents – which are all completed in the app – in 24 hours rather than two weeks.

The bank’s “1% concierge” feature can be defined as “something exclusive on short-term notice” like a hotel room in the early morning. The bank will also promise to host exclusive events to help members meet each other and spread the service by word of mouth.

Aware of the lack of transparency which can often shroud private banking, Fudge says he wants to be totally transparent and the “least private, private bank” in terms of its customer messaging.

When asked how weathered investors are receiving the pitch by a team so young and new to the banking world, Fudge says “there are people with a lot more money and who are a lot younger” than him. “Some have more money than most regional banks in the US,” he adds.

With this in mind, the start-up has already secured €1.1 million from largely angel investors and aims to close at least €1.5 million by the end of its first funding round.