The neobank is offering users an instant virtual card for online transactions, “flexible” funding options, in-app card controls and accounts which will allow customers to store money in foreign currencies and earn more interest the more they save. 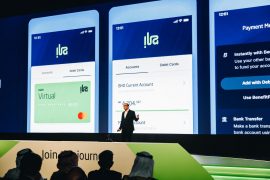 The challenger has also created a ‘digital DNA customer assistant’ called Fatema with artificial intelligence to answer customer questions through its website 24/7.

ila Bank says its onboarding process takes just two minutes with two ID’s and a selfie, and Bank ABC’s deputy group CEO Sael Al Waary reveals the ila team is already working on a new set of features for the app’s next version.

“Less than two years ago, we promised to transform banking, and here we are tonight delivering on our promise,” says Waary.

The deputy group CEO’s keynote at the Ritz Carlton Hotel Bahrain was part of the bank’s launch of ila, which also saw attendees from Bahrain’s government and central bank.

Bank ABC’s group CEO Khaled Kawan also addressed the audience, dubbing the launch as “an exciting time not just for us [the bank], but also for the country”.

“Digital transformation presents a huge opportunity to drive lasting positive change throughout the Kingdom [of Bahrain], something that Bank ABC is proud to be leading,” adds Kawan.