At the beginning of December, UK prime minister Boris Johnson vowed he would levy a 2% tax on digital sales made by big social media platforms, search engines and online marketplaces.

The announcement came despite US president Donald Trump’s clear opposition to France’s digital tax plan, which saw French lawmakers vote to impose a 3% tax on American technology giants in July 2019. France’s tax will apply to digital companies with an annual global revenue of more than €750 million ($845 million), and French sales of more than €25 million ($27.9 million).

The UK is looking to bring in its own digital tax in April 2020, and will follow similar guidelines to France’s by applying to companies with global revenues of more than £500 million ($660.6 million), or UK sales of more than £25 million ($33 million). 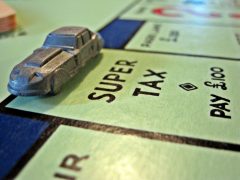 “The 2% digital tax could be dangerous for many digital businesses,” says Taptrip’s CEO

In line with France and the UK’s feelings that big tech companies need to make a fairer contribution, fellow EU countries Spain, Italy and Austria are considering their own taxes. Ireland, Sweden, Denmark and Finland are all opposing them.

Despite the fact it’s aimed at companies like Amazon, Facebook and Google, the revenue brackets could begin to apply to fintechs. Juniper Research revealed earlier this year that fintech platform revenues will reach $638 billion by 2024, which is more than double the estimated $263 billion fintechs are expected to bring in for 2019.

“The 2% digital tax could be dangerous for many digital businesses that have low margins and focus on high volumes due to the margins being squeezed,” says expense booking platform Taptrip’s CEO Thomas Young, who notes it could risk jobs and the bottom lines of fintechs with these models.

“I don’t think there will be any winner through the new digital tax. Instead, further uncertainty and risks of tariffs with a major trade partner,” adds Young.

If the tax is levied in April 2020, it could also see a retaliation from Trump on UK companies. Having already imposed tariffs on cheese, lipstick, handbags and sparkling wine – some $2.4 billion-worth of French imports – the UK’s similar tax could see certain UK imports or digital companies similarly punished.

Young is certain “fintech between London and New York will be directly affected” by this anticipated retaliation, “given the two financial hubs they are”.

Payment processor Adflex’s CEO Pat Bermingham says “someone has got to reign in the ‘big five'” – Apple, Amazon, the holding company for Google Alphabet, Microsoft and Facebook – but recognises it “could kill fintechs completely”. He compares it to the small 1% or 2% margins which pay for card rewards in the payments industry. “The more fragmented that pie becomes, the more that 2% is shared,” says Bermingham.

The proposal of a UK digital tax also comes at a time when there is a massive skills shortage in fintech across Britain. In 2018, UK companies lost out on £6.3 billion because of a worsening skills shortage, according to Open University’s research.

Bermingham says it is so “poor” that companies are going to other countries, citing the departure of Dyson’s headquarters to Singapore which he implies was driven in part by the attractive prospect of a more highly skilled workforce.

There are then those who think the big five tech companies will completely avoid the new proposed tax anyway.

“The 2% digital tax proposed by Boris Johnson will have no obvious impact when applied to companies such as Amazon, Google and Facebook – ie. companies whose operations for tax purposes fall outside the remit of the UK tax authority,” says Julian Fisher, the CEO of AmazonGO-esque UK start-up Jisp.

“At 2% it is merely a drop in the ocean. In the same vein, no self-respecting UK-based tax paying technology firm will see this as addressing the imbalance. For that to happen the laws on tax need to be changed radically,” Fisher concludes.

There is still a chance the digital tax won’t go through. The Treasury says the tax would be dropped if an international consensus could be reached before April 2020 on overhauling corporation tax in the digital age, and the Treasury’s financial secretary says that if the tax does go through it will be “pending a longer-term international settlement”.