MMP Financial, an online small loan lender which trades as My Money Partner and Swift Sterling, has entered administration this week following regulatory clamp downs on affordability checks and compliance in the UK.

These latest two payday lenders to fall before Christmas trail the collapse of a third payday lender, PiggyBank, whose owner DJS entered administration just 24 hours earlier after regulators conducted investigations in September into the creditworthiness assessments of its new customers.

Customers of all three lenders have been warned they’ll be treated as “unsecured creditors”, which means their compensation could be significantly less because the companies have stopped trading. 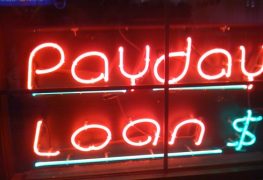 At PiggyBank, 45,000 customers are still paying outstanding loans. The circumstances of MMP’s administration are not yet clear, but the UK’s Financial Conduct Authority (FCA) has confirmed Grant Thornton’s partners Chris Laverty, Trevor Patrick O’Sullivan and Helen Dale will be conducting the administration.

The payday lenders loan amounts of up to £1,000 to customers before their next payday or within a few months. PiggyBank was banned from issuing more loans in July, and MMP now says it is “no longer accepting loan applications for new or existing customers” on its website.

FCA chief executive of the Consumer Finance Organisation (CFA) Jason Wassell questions where people will be able to access credit across the busy holiday period, following “the departure of a number of commercial lenders and not-for-profit credit unions” in the last few weeks.

“While some may cheer the exit of another lender, it is not quite the cause for celebration for many families that rely on borrowing at this time of year,” says Wassell, who suspects there will be an increase in unregulated borrowing from “hard-pressed family members” or “individuals with links to criminality” as a result of the collapses.

Since the collapse of Wonga in 2018, the high street has seen a rapid decline in the number of big name payday lenders.

The Money Shop and QuickQuid collapsed after suffering high volumes of customer complaints. Then last month pawnbroker H&T announced stopped offering short term loans to customers pending the conclusion of an investigation by the FCA.