The fintech closed $20 million in an investment round earlier this year led by the likes of HSBC and Goldman Sachs. But after axing 20% of its staff last month and undergoing a complete business restructure geared towards sales and product development, Bud has decided it will tap into retailers, utility providers and insurance companies among others as well as serving banks. 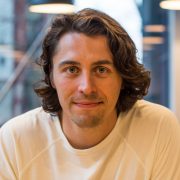 “It’s a bigger opportunity than just big global banks, retailers need to start using what fintechs have access to,” says its CEO Ed Maslaveckas. “It’s a new opportunity for growth, and we’d be remiss if we had those opportunities in front of us and we didn’t take advantage of them.”

Over the last four years, Maslaveckas says the fintech has been working with “the largest banks in the world”, justifying the lay-offs as necessary to understand “what teams and skill-sets are required to deliver to” its new set of targeted sectors.

Now the fintech is working to replace its legacy Bud X offering with a new offering geared towards retailers and the like.

“In the last six months we undertook a process around building a product with some test customers, and that culminated in a live product open to developers from all sorts of industries,” says Maslaveckas. “We’re democratising the access to the data, but also to the intelligence services we’ve built on top of that data.”