HSBC is aiming to embrace new technologies and relaunch First Direct as a contender in the digital arena, writes Jane Connolly. 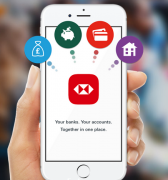 The Financial Times reports that the bank is looking at options such an in-app marketplace and artificial intelligence-driven features, such as automatic savings and personalised offers.

The bank aims to attract younger customers by stepping up its digital appeal, while also allowing customers with limited credit histories to open accounts and improve their records.

Established as a branchless division of Midland Bank in 1989, First Direct has built strong client satisfaction ratings with its telephone-based customer service.

“We have a proud heritage of being the original challenger bank back in 1989,” Joe Gordon, First Direct’s chief executive, told the Financial Times. “Now we’re making a real digital pivot to tackle the environment as it is now.”

Earlier this year, HSBC took part in a $20 million funding round for UK fintech Bud, alongside Goldman Sachs. Gordon says Bud is among the fintechs that HSBC is working with to develop new digital services.

The bank will be working on the changes over the next year and if successful, new features may eventually be added to HSBC’s main brand. Meanwhile, HSBC is also reportedly working on a new digital banking service, internally dubbed Project Iceberg.