The Libra Association has announced the 21 companies who have officially signed a charter backing the project, following its meeting in Geneva, Switzerland on Monday. 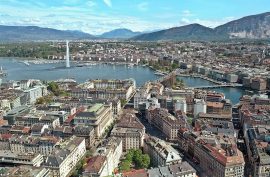 The Libra Association and 21 other companies met in Geneva, Switzerland

As well as enshrining support from the likes of Spotify, Uber, Netherlands-based fintech PayU and UK mobile network Vodafone, the meeting also agreed on the project’s new association board members and executive staff.

The association board was fixed to five members, which will include Facebook’s ex-blockchain lead who is now the CEO of Libra’s cryptocurrency wallet Calibra, David Marcus, pointing to Facebook’s persistent position as a key player in the project.

Ex-PayPal director Bertrand Perez will remain Libra’s permanent COO, and its interim MD, but he was also newly appointed as Libra’s council and board chairperson.

Dante Disparte, a fellow PayPal alum who currently serves as a member on an advisory council in the Federal Emergency Management Agency (FEMA), will continue to be head of policy and communications and deputy chairperson of the board and council.

Kurt Hemecker, another ex-PayPal director, will continue to head business development for the project.

Facebook was hit with a law suit four days before Libra’s meeting on October 10 by Finco Services, an online banking start-up which is suing the social media giant for trademark infringement over the Calibra logo, according to Reuters.

Despite PayPal, Visa, Mastercard, Booking Holdings, eBay, Stripe and Mercado Pago all pulling out at the eleventh hour, Libra said on Monday that 1,500 entities have expressed interest in joining the project – 180 of which meet its partner criteria.