North Korea plans its own bitcoin

North Korea is in the early stages of developing its own cryptocurrency in a bid to avoid crippling international sanctions and to circumvent the US-dominated global financial system, a representative for the regime told Vice News.

Capital city Pyongyang has long shown an interest in cryptocurrencies, with the country recently bringing together homegrown experts with foreign companies at its first-ever blockchain and cryptocurrency conference in April. 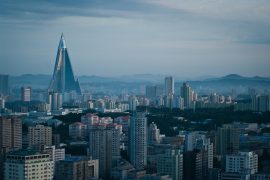 Capital city Pyongyang has long shown an interest in cryptocurrencies

The digital currency, which doesn’t even have a name yet, will be “more like bitcoin or other cryptocurrencies,” says Alejandro Cao de Benos, the official in charge of North Korea’s cryptocurrency conferences, and a special delegate for the Committee for Cultural Relations for the Democratic People’s Republic of Korea (DPRK).

“We are still in the very early stages in the creation of the token. Now we are in the phase of studying the goods that will give value to it,” said Cao de Benos, adding that there are “no plans to digitise the [North Korean currency] won for now.”

North Korea’s Embassy to the UN in New York would neither confirm nor deny Cao de Benos’s claim. “I am not in a position to give you an answer,” an embassy spokesperson said before hanging up.

While bitcoin offers some anonymity, it has become easier for law enforcement and governments to track bitcoin payments across the world, and by building their own cryptocurrency, Pyongyang would be able to control how it works and who has access to it — the same reason countries such as Russia, Venezuela and Iran have explored similar projects.

“The Russian government and Russian companies have been involved in a number of blockchain and cryptocurrency projects around the world,” says Annie Fixler, an expert on sanctions and illicit finance at the conservative, Washington-based think tank Foundation for Defense of Democracies. “If there is strong Russian participation in the conference, that might indicate a level of seriousness and maturity.”

Russia, together with Iran and Venezuela, have all voiced interest in creating nationalised cryptocurrencies in the past, which their leaders paint as tools to offset US financial power and increase sanctions resistance.

But Pyongyang will need to convince international partners that its version of bitcoin is worth using, and one way of doing that is to show its digital coin can circumvent Western sanctions.

“Washington’s use of sanctions now is reliant on the dollar’s role in the global financial system – US sanctions have significant secondary effects because non-US banks can’t risk losing access to dollar transactions by doing business with sanctioned persons,” says Fixler. “If transactions can flow easily around the world without touching the dollar, then nations like North Korea are insulated from US sanctions.”

Its interest in the blockchain is not limited to simply stealing bitcoin, however. In 2018, Jonathan Foong Kah Keong, a captain based in Singapore who the UN says has been helping North Korea evade sanctions since 2013, established a company in Hong Kong called Marine Chain that sold digital tokens in exchange for partial ownership of maritime vessels.

According to a UN investigation, “the platform could be used to generate money for the regime and as a potential means of evading sanctions on shipping by creating a new method of obscuring the ownership of a vessel.”

Cao de Benos claims some foreign companies even signed contracts with the North Korean government to develop blockchain systems in areas like education, medicine and finance. However, he added that none of the “big names” attending the conference or signing contracts could be revealed “due to sanctions and fake news”.

Though North Korean officials won’t divulge who will be attending its blockchain conference next February, experts believe that Russia could have a significant presence. The two countries have sought closer trading links in recent years, epitomised by Russian President Vladimir Putin’s first-ever meeting with Kim Jong Un in Vladivostok earlier this year.