The profound romance of plumbing and core banking infrastructure 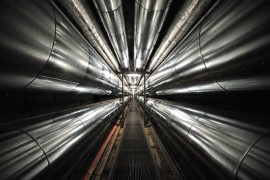 I have a confession to make.

I have a dramatic streak in me. Grand statements, emotional denouements. Braveheart style last stands. That sort of thing speaks to me. Not the drama. The purpose. The emotional intent. What does a person like you do in banking, I hear you ask?

For a long time I got very frustrated. Then the world started to change. Not only did caring become acceptable. But we got the means to translate this care into products, roadmaps, policies. And yet it was not enough. It was a start. It was important. But it was not enough. Because it only went as far and as deep as our legacy systems and product monetisation strategies permitted. And although they became stretched and strained and things changed, the fundamental mathematics of banking stayed the same: even though regulatory barriers to entry were lowered, the technical ones weren’t. Build or buy, setting up a bank is slow and expensive. Choices are made today for systems that will go live in years guaranteeing a certain degree of obsolescence right out of the gate. But what can you do? What options do you have?

The times they are a-changin’

The way things used to be is no longer an acceptable reason for anything. I can’t tell you how happy that makes me.

Challengers are emerging. Across the board and increasingly, finally, core banking, long-deemed too boring for innovation, too big for experimentation, too creaky and slow for hope. It was the thing that limited us, the thing that held us back.

But also the more of us working in the space, the faster the narrative will change, the sooner “the way things used to be” will cease to matter. And for someone like me, who likes a little bit of dramatic grandstanding, it is a great time to be a plumber.

Admittedly, “utilities for the masses” has zero ring to it, as a rallying cry.

Not being funny. A thing that takes five years to build (if you are lucky) and by the time it’s finished it’s five years out of date in tech terms; a thing that replicates how you used to do business 30 years ago because the thought of changing everything brings career-ending disaster to mind; a thing that costs more than the GDP of a small country to just keep you tomorrow where you are at today… that is not a useful thing. I don’t even know what you were trying to do in the first place and I am telling you this thing isn’t useful.

Limiting your ambition to the infrastructure’s worst day is the measure of how “not useful” this thing is. Not by design or malice. Just by the relentless passing of time and inadequate keeping up and future-proofing.

And we are where we are.

Because I love a bit of grandstanding and I want banking to be an enabler. And for that to happen, banking needs to be accessible. Not just to individuals. First it has to be accessible to the banks themselves.

Utilities are ubiquitous and universal

How do you democratise finance?

Things are not creaky and expensive just because bankers are greedy. Sure there is some of that in play, as with humans everywhere, but really that’s not it. Costs and timings are bound to ways of doing business. Rules and systems. The tools we have to do the thing.

If it takes five years and $200 million to stand up a ledger, then the service at the other end will be slow and expensive.

It matters, so we are doing it.

We are doing it with Foundry. But we are not alone.

There are others fighting the good fight (and yes I think my baby is prettier and my product better, as I would because I get to make choices towards where I believe the real problems lie, the real value can be unlocked. I think it’s better because I am dedicating every ounce of effort to make it so), but the point remains, we are on the same side, we fight for the same things: utilities are meant to be huge, functional, taken-for-granted and expected to work for the betterment of life. Just like plumbing. Maybe that’s not romantic to you. But to me, it’s my little slice of resistance. My own battle for freedom.

So here it is. My little braveheart moment.

Maybe money will always be unevenly distributed but there is no reason why banking should be a continuation of inequality. Democratising access to banking means access to education, healthcare, pensions. Options.

And yes, core banking infrastructure that enables real time capability building, at a lower cost and in a matter of minutes rather than years, is my little way of doing that.

Foundry is our way of doing that.

Maybe they won’t make a movie about transforming core banking and democratising access to finance – for people, for challengers, for incumbents who want to change the rules. But every step in that direction is a step away from the dystopian future of immense inequality and polarisation we all fear. And even if I don’t get to deliver a dramatic speech about what never happened, it helps me sleep at night, to know we are united by purpose.

And we are not alone.