Palestine Islamic Bank goes digital with Temenos to the core 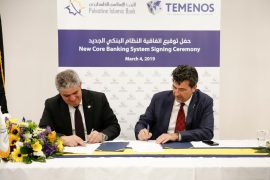 Founded in Palestine in 1995, PIB operates a network of 43 branches, making it the largest Islamic banking network in the country.

As part of the deal, PIB also gets Islamic banking capabilities, analytics and reporting; and risk and compliance. It is understood the new software will replace the ICS Banks system from ICS Financial Systems (ICSFS), which has been running in the bank for a decade.

Interestingly, at the start of 2018, PIB selected a different supplier and tech – Oracle FSS’s Flexcube (core banking) and analytical applications. The project, however, was shelved with the arrival of a new shareholder later that year, The National Bank (TNB). Via its buy-out vehicle – the National Islamic Investment Company – TNB bought 45% of PIB for $70 million, making it the majority shareholder. TNB is already a T24 Transact user (it went live with the system in 2017).

Other users of T24 Transact in Palestine include SAFA Bank.