Many deem Frankfurt to be the city that will host most of the banks and fintech companies emigrating away from London as a result of Brexit’s new status quo. 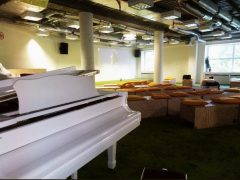 TechQuartier works to the tune of fintech.

Germany Trade & Invest (GTAI) hosted FinTech Futures over at Frankfurt’s TechQuartier, an innovation and collaboration hub with a specific focus on fintech firms.

It is definitely a candidate to be kept an eye on, but it is just overly hyped to what it amounts in reality.

In 2010, Frankfurt hosted nearly 250 national international banks. This number has increased since, and with many UK banks starting to set up offices there, the current estimations are much higher.

However, on the fintech side, the picture doesn’t look as prolific. Fintech companies are in short supply, and the start-up ecosystem is not comparable to London’s.

Earlier this summer, FinTech Futures ran a series of polls which crowned England as the best fintech country in the world, beating Germany in a final that was a bit more toe-to-toe than it should have.

This clearly points towards a certain sentiment – that Germany leads the way in fintech investment and applications, but in Germany, those working in the industry know that the reality is different.

Hugo Paquin, who helps run TechQuartier, when asked about Germany being at the forefront of digital banking, says: “Not at all! I’d be inclined to say that when it comes to banking, Germany is not really that far ahead. I mean, we have got N26, but it is really unique. Other banks, like ING and DB Group, are definitely investing and looking into innovation, but implementation hasn’t gone that far”.

He adds: “In terms of banking, Frankfurt is definitely up there, but fintech is a different story.” Paquin tells us that there’s only 350 start-ups in Frankfurt – only a fraction of them are fintechs.

The hope is that fintechs start realising the potential of the city due to the density of banks and start-ups migrating there.

Ute Richter runs TechQuartier’s sister hub in Darmstadt, Hub 31, which is solely focused on cybersecurity. She believes that Germany is now starting to see a more risk-prone attitude towards innovation and start-ups, but she believes there is a cultural reason why Germans have been quite reluctant to start their own firms. 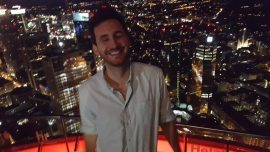 This is what a happy journalist in Frankfurt looks like – a rare sight.

While we were at the hub, we managed to talk to some people that are fully immersed in the banking and fintech world in Germany. For example, we managed to see the Plug And Play team getting settled in their newly launched fintech platform, aimed to make the most out of the fintech appetite taking flight in Frankfurt.

One of these is Pascal Di Prima, CEO at regtech Lexema. Its product, which has recently completed its pilot with German banks, is looking to expand into other markets to educate banks’ executives on EU regulation.

“I believe that while it is not now, Frankfurt definitely has the potential to host a large amount of fintech companies and become a fintech hub,” he says. “This may look like a good thing, but only in the short term. The damage that Brexit can do to Europe and globally outweighs the short-term potential of fintech companies to thrive locally.”

He’s not the only one who feels this way. Throughout the hub’s fintechs firms, the possibility of Frankfurt to become a fintech hub in lieu of London is far down the list of things around Brexit occupying their mind.

Regardless of London’s fintech exodus, it was clear that Frankfurt needed a boost to accommodate start-ups and fintechs in particular. TechQuartier represents exactly that, alongside the 11 other innovation hubs (D-hubs) throughout the country, aimed at promoting digital and tech innovation.

The hub was founded nearly two years ago and has already attracted international attention from firms which want to ramp up their development. With access to tier 1 banks and a range of fintechs to collaborate, TechQuartier is preparing the foundations for a thriving fintech ecosystem in Frankfurt.

“All these start-ups work in the same space, which means it is very easy for them to collaborate with each other – we shouldn’t dismiss the geographical proximity,” adds Paquin.