England defeated Germany in the final of our Fintech World Cup as the culmination of 24 Twitter polls came to its glorious end. 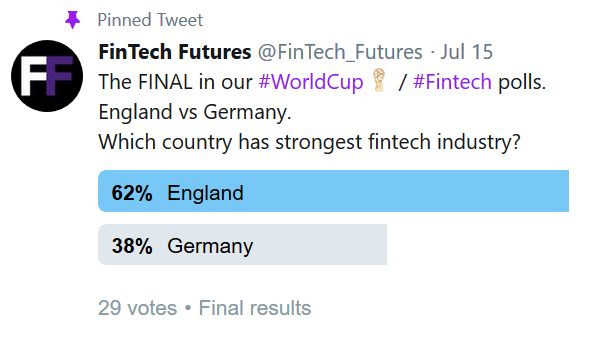 During the football World Cup, FinTech Futures ran the polls on the social media platform for a bit of fun and to gauge the fintech zeitgeist. The question was simple: Which country has the strongest fintech industry?

All the teams in our version were the same as those in the football tournament. Same 32 nations, groups and format. Of course, this meant there was no US, China, India, Italy, Netherlands or Singapore.

The group stages didn’t throw up too many surprises. However, Australia failed to get out of its gang of four as it was up against Denmark and France. Sweden also came a cropper, with Germany and South Korea getting through.

In the second round, Japan emerged as an early favourite with some strong backing and plenty of interest on Twitter. The seven others who got through were perhaps the usual suspects – Russia, Denmark, Spain, France, Switzerland, England and Germany. 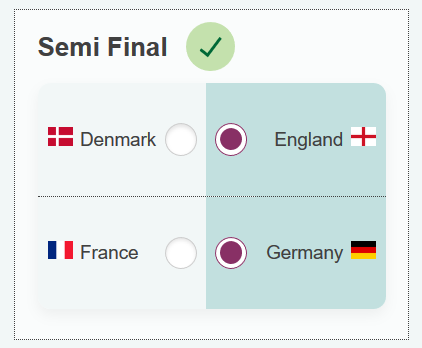 The quarter-finals started to get juicy and very competitive. Denmark defeated Russia, England outclassed Switzerland, France fought off Spain, and in a penalty shootout Germany grabbed glory against Japan.

This was the only shootout in the entire tournament. It was simply dice rolls after a one-hour tiebreaker failed to reveal a winner. It seems Germany can win these as they do in real life.

With only four left, our event partially mirrored the football semi-finals. But this time England saw off Denmark, while Germany beat France.

No one cares too much about the third-place play-off, but on Saturday (14 July) Denmark overcame the pain barrier to fight off France.

You already know the final result.

Our last poll started on 15 July and ended today (16 July). While France may have won the real World Cup, waistcoat-wearing England can take some comfort that its industry was seen by our readers as number one. Well done. And well played to all the teams and voters.