Don’t be that guy: cautionary tales for banking and life 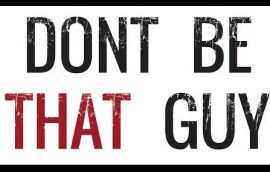 One of my best and oldest friends has this pet peeve I don’t fully understand.

He hates people who go to a gig wearing the band’s T-shirt. You have not seen a man more irate. His advice? Don’t be that guy.

It’s good advice, to be honest: because it works.

Not just when it comes to gigging – although god knows, 25 years of instruction and I have never been that guy. The aphorism works because it is pithy and helpful. It is actionable and specific.

If he can identify a set of behaviours that tend to represent something that doesn’t do any of us any good, and he manages to express those characteristics in one easy-to-remember phrase then the least you can do for us all, is not be that guy.

Management by chapter not verse

I don’t know if this happens to you too, but I often meet colleagues, clients and (sadly for me) also occasionally bosses who have obviously read the management book, done the training, got the memo. But what they took away didn’t change the way they work, it just informed the way they defend the choices they would make anyway.

You know the guy.

He will demand Wildly Important Goal meetings per project (the whole point of which is to enhance focus) but refuse to calibrate the project portfolio to avoid the inevitable dilution of resources and, what’s the word…. oh yes. Focus.

He will have a comprehensive set of lead measures but he won’t act on them. He won’t adjust them to achieve the end result. He will measure them and manage to them. For now they are KPIs and KPIs feed into bonus discussions. And he knows which side his bread is buttered on.

You know the guy. Don’t be that guy.

Banks are not good at changing things. When trying to or having to affect change, everything that can go wrong, will.

People will provision environments and forget to create access credentials. People will run comprehensive pilots. Locally. Then Bob goes on holiday and the entire programme shuts down because it was mostly running on his laptop. ‘That guy Dave’ will leave the bank and nobody can make heads or tails of his macros, behind the spreadsheets that in turn run complex reconciliations. Regulation will change and a whole team of people producing reporting and maintaining physical records in line with the law will not be told. For years.

These things happen every day. All those are true stories.

Some times we horse-trade. Some times we appeal to people’s better demons. Some times we call their boss. We overcome. But we don’t fix. We find instances of systemic problems and we deal with their impact on our projects, but we don’t address them in any meaningful way. We don’t make it easier for the next guy. Which is plain stupid because the next guy is usually, ironically, us. Wearing the colours of the next project.

We keep being this guy. Let’s stop that.

Transparency as a weapon of mass destruction

Hate to break the news here folks. Nothing is good in and of itself, with no contextual reference.

Water is good for you, unless you are a book.

So transparency is good if constructive and comprehensive.

Revelation needs to be helpful, aligned to a purpose and sustained. Transparency is an always on kind of thing. It’s not a torch occasionally sweeping for murky corners. And it should not be a weapon.

In the name of transparency I have seen people raise issues and concerns in the presence of senior management, catching their teams and colleagues entirely off guard by raising said issues for the very first time in front of a very senior audience that will not hear about this again, won’t be part of the fix (assuming a fix is needed) and won’t remember much more other than the jarring implication of escalation. Because true or not, no executive assumes that they are the first port of call. By citing transparency you bank on the unspoken assumptions of the workplace and hide behind the fact that nobody can accuse you of throwing them under the bus with a hope in hell of having an acceptable answer to the defence “transparency is a core value for me, I am sorry you don’t see it this way”.

In the name of transparency, insights or mishaps will be shared out of context. Snippets of truth without the benefit of a full story, the burden of full accountability or a clear sense of what next, other than point-scoring. Transparency for its own sake is a mighty tool for self promotion or self protection.

You know this guy. He takes a principle and twist it to a weapon that can be defended in the name of the value but serves a totally different purpose in his hands.

Don’t be that guy.

Don’t mock from a place of power

Now. Anyone who knows me knows I will mock my loved ones mercilessly and, if my sister is to be believed, long after it all stopped being funny. I beg to differ. I think it’s hilarious. So she calls me an idiot and mocks my puerile sense of humour. And it’s ok. Because she’s right. But also because mockery is a democratic affair. It only works if it is explicitly reciprocal.

In the office, parity is a very fragile thing. And although you are perfectly within your rights to mock your co-workers’ choice of lunch (Geoff Whitehouse even sang at me that apparently you make no friends with salad) or their terrible new ring tone or the fact that they have, yet again, locked themselves out of their house when taking the rubbish out, you cannot mock their work. Ever. Particularly if you are senior to them.

And I am saying this from a place of long and bitter experience at the receiving end of patronising laughs and sneering facial arrangements.

As someone advocating change, suggesting alternatives, seeking alignment with purpose and driving experiments in corporates, I have been faced with the barely concealed disdain of people who felt too important to have to think anything new. People who mock things that are yet not proven to work, as if in their experience truths emerge fully formed and universally accepted. People who rush to meet a complicated question with a knowing wink and a facile answer. People who say “always”, “never” and “I know” often. People who consider past mishaps a guarantee of future failure. People who know best and dismiss you and your work as frivolous, immaterial, transient.

People who belittle anything that doesn’t fit the pre-existing shapes of the world, as if aberration is an affliction, as if divergence could never be a choice and therefore it is proof of inadequacy.

You know this guy: he is the person who considers optimism a sign of stupidity and a willingness to look for ways rather than obstacles an indication that you don’t have a real job keeping you busy and out of trouble.

Don’t be that guy.

A few days ago David Brear tweeted just that.

He had had the kind of day his 13 year old self would have thought is awesome. And it got me thinking.

But more to the point. At eight, we knew not to be that guy.

We all knew when to call foul. We would call people out for cheating when they violated the heart of the game, not just its rules. Cheating was a matter of honour nor instruction, and justice was swift.

At eight, when things didn’t work, we fixed them for next time.

We spent days building a ramp into the empty lot next to the playground, so that when the dog jumped over the fence, we could get him out faster (without having to call dad). We put time and effort into working out access short cuts, the optimal noise levels for cartoons during nap time, the friendliness of neighbours whose gardens offered handy short cuts. We spent time working out the things we knew we would need again.

We spent weeks negotiating the balance of games, the rotas and sequences, the expectations of each other. And if someone feigned a lack of understanding of all that was implied, then they risked being ostracised from the game for good.

At eight you knew not to snitch. You could fight like cats and dogs. But when it came to higher authorities you didn’t snitch. And even the grown ups were compelled to respect the Code: some things are not yours to tell. Some people should consult their eight year old selves more often.

Oh and while you are at it, remember to ask your eight year old self how they feel about mocking. I bet they will say don’t give unless you are prepared to take. Otherwise you are just a bully. And bullies are never invited to muck in and be part of the fun. They are also the last people to make friends who will have their back. Friends who will tell them not to be that guy when it matters the most. Like when you are tempted to wear the band t shirt to the gig, or when you slip up at work and you are less than you can be.

Surround yourself with people who will remind you not to be that guy. People who will help you remember what every 8 year old knows about playing fair and will call you out when you are being that guy. You know the one.

Oh. And if you find yourself at a gig and the sound engineer looks at you in disgust, you have met my friend Marios and You Are That Guy. You’ve been warned.