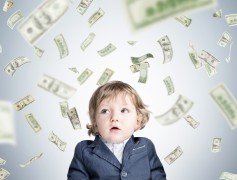 A revolution in pocket money is coming

As a child, the highlight of the week was being given our pocket money; whether we spent it on sweets, cinema tickets, music or treats, the physical coins or notes were dutifully stored away in some variation of a piggy bank, or better still; hidden strategically in a place far away from siblings and parents.

Classic cash occasions such as coins under our pillow from the tooth fairy, or a Christmas card stuffed with a five pound note from a Granny were momentous, exciting events in our youth.

However, as it was then, and still is now, receiving money as a child holds so much more value than simply its monetary amount. It’s about what that lets you do – be it saving for the future, or spending it in the moment – it’s the very first taste of independence.

For the children of today, new payments technology is triggering a revolution in pocket money. As the nation moves towards cashless transactions, parents are now paying their children’s weekly allowance via online bank transfers, smartphone apps and prepaid cards.

In the UK, cash remains a popular option with 61% of parents choosing to pay this way according to the biennial payments report from Vocalink, “State of Pay”. However, evidence suggests that the mindset is starting to shift, with almost half of all parents (49%) saying that they’re now interested in paying their children’s pocket money using their mobile phone or an app in the future. So far, the report shows that 16% of parents are already giving their children pocket money using online bank transfers, a further 11% via smartphone apps and 4% through pre-paid cards.

This new trend can be attributed to a number of factors such as the move towards digital payments in schools, parents not having cash on them as frequently as before, the overall convenience factor and a willingness of children to adopt new payments technologies such as a Mastercard Prepaid card. There is also the issue of pocket money itself and the increase in the amounts that children now receive.

According to a survey by Childwise Monitor 2018, children are now getting £11.20 in pocket money per week on average – up from £9.70 a year ago says the group. With consumers increasingly preferring cashless methods of payment, having the money in your pocket to pay an allowance for two or more children could become increasingly rare. Alongside this, with increasing adoption of mobile devices by children and young people, there is more to spend money on electronically – the app store replacing Woolworth’s counter.

The move by schools to introduce digital payments systems has also had a knock-on effect. Pioneered by ParentPay in Croydon in 2003, the concept was designed to integrate with cashless catering systems in secondary schools, as well as acting as a stand-alone dinner money management system for smaller primary schools. Today, it serves over 5,500 schools in 200 local authorities, helping about 1.5 million families.

According to the State of Pay payments report, such systems are riding a new wave of digital payment culture nationally with over half of UK parents now changing their everyday payment behaviours as a result. These systems allow children to use ID and biometrics to pay for their school lunches, school trips and other services and then the money is taken from the parents’ account. Originally the concept was introduced to stop bullies from stealing pupils’ lunch money. Now, this new generation of digital payments systems in schools is gaining momentum rapidly and is proving popular with parents, with 59% of parents saying that they would be interested in paying for school meals, trips and clubs using their mobile phone or an app in the future.

It’s not just the convenience of the transaction that’s a win-win for parents. With some e-payment systems they can receive information about the type of food and drink their child is accessing. For others, it’s not just lunch money, and as other services come online in schools across the UK, the ability to monitor their children’s spending patterns is an increasingly attractive feature. Not such great news for the kids you might think, but for 51% of the younger parent group this is the perfect solution. They’re now able to see whether their children are eating healthily when they’re not with them and if they’re spending their money wisely and appropriately with greater security.

There is no doubt that we’re experiencing an increased national confidence when it comes to digital and cashless payments and specifically the use of smartphones to make instant payments; the number of people using their phones for peer-to-peer (P2P) has risen dramatically up from only 9% in 2013 to 52% in 2017. Parents are clearly becoming more comfortable with consumer-to-business (C2B) payments, such as settling a digital school account at the end of the month; 40% agree that they are now much more comfortable with other cashless or digital payment methods as a direct result of using the new generation of school digital payments systems.

What does this indicate for the future? Rising demand to pay electronically represents an enormous opportunity for those organisations most trusted by parents to help guide and educate them on existing, new and future payments products ensuring that they are embracing new technologies to their advantage. It’s obvious that the mind-set is gradually starting to shift as digital and cashless real-time payments provide parents with a new visibility and convenience that cash is unable to deliver. Where they go next is dependent on the sector’s ability to inspire confidence and communicate convenience and trust in future products and apps.

By Paul Stoddart, CEO of Vocalink, a Mastercard company