Finastra Universe London 2017: open banking and the rise of AI

Finastra has revealed its focus on the open innovation of smart technologies in banking, alongside artificial intelligence (AI), machine learning/deep learning.

In a day-filled event held yesterday (14 November) at the County Hall by the river Thames – alongside other banks and fintechs – Finastra Universe London 2017 wasn’t just a showcase of its tools and technologies, but an opportunity for discussions, polls and debates on whether the future is now and if so, how it will be utilised.

Discussion on the high customer drive for open banking

With an introduction from Finastra deputy CEO, Simon Paris; he discussed its growing FusionFabric.cloud ecosystem as a kick starter into the adoption of open banking. Things proceeded onto a panel discussion on whether the revolution of open banking is a friend or foe?

The panel consisted of members from the Euro Banking Association (EBA), Lloyds, Silicon Valley Bank, and start-up, Bud. Starting things off with a poll to the audience, which merely asked what is open banking to you? – there was only one unanimous agreement; it’s an opportunity for banks.

When it comes it open banking, discussions do draw towards to a similar conclusion, and the one thing banks and fintechs do agree on is that it isn’t just about creating/implementing APIs. It’s about taking the technology, whether distributed ledger technology (DLT), blockchain, AI and connecting it between all banks in a shared and collaborative ecosystem.

Not only that, but the panel also discussed the high customer drive for open banking, with grasping at the opportunity to support trends being a no-brainer, especially when it comes to integration and offering more platforms to clients.

I would go later to speak with Simon Paris about the steps businesses can take to build towards a technology-driven future. Following a layered tiered hierarchical, whereby seeing the impact sector by sector will allow businesses to cater to its needs.

So not much of a revolution, but as somewhat of an evolution. 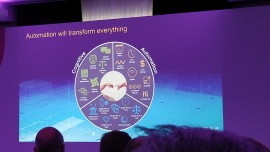 IBM’s Mike Hobday, VP of cognitive and advanced analyst solutions, was an ideal choice to talk about the future of AI and improving the quality of machine learning.

During the discussion, attention drew to how automation will transform everything within banking environments. A diagram demonstrated three factors: cognitive (machine learning, endless capacity); automation (speed, scalability and 24/7 services) and trust (permissions of data use and personal information).

According to Hobday, over time, these cognitive solutions will soon be implemented to meet the needs of specific tasks, especially when it comes to repetitive functions with consistent results.

With another audience poll showing 41.7% saying yes to implementing AI tools, very few disagreed. While the second highest result, 33.3%, voted it’s considered, but is some time away.

By seeing the patterns, AI can learn, adapt and may even be cost saving and profitable. However, at the same time, security and fraud detection was touched on as it’s no doubt a priority of many banks considering the adaption of AI technologies. 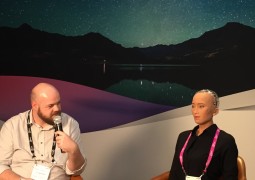 One of us needs a wig more than the other

With the highlight of Finastra’s event being the presence of the humanoid robot, Sophia from Hanson Robotics, it has brought focus on the much-debated rise of AIs and robots, and how they could progress the future of banking.

Finastra CMO, Martin Häring, discussed the topic of implementation and scenarios. With General Data Protection Regulation (GDPR) putting data control in the hands of the customer, banks and even commerce businesses have to be open to competition.

We’ve already seen this happen with the rise of payment technologies from Google and Apple, as well as the e-commerce data grasp Amazon has.

For Haring and Finastra’s tools, the eventual standpoint is taking the information provided and with machine augmentation, create valuable, streamlined services, many of which can be catered to the customer.

Then was a chance to have an informal chat with Sophia. All prepped and without a lower half of a body, hair and eerily smiling, speaking with Sophia was somewhat bemusing. Although she understood my questions on open banking and the future of AI, her responses were rather generic and limited – although she did tell us that “techno” to no surprise was her favourite genre of music.

Still, fascinating nonetheless and one thing is assured, machines won’t be replacing us anytime soon.  Even Sophia assured this at the end by saying “machines are here to make life better, improve and drive innovation”.

Finastra Universe 2017 was another packed event, as we come closer to the regulations of PSD2 and the adoption of open banking. It’s always interesting to see what trends banks are latching on to these days.

While we may not be in a world full of Blade Runner-style replicants almost indistinguishable to humans, the technical progress companies have achieved so far has been no less impressive.

With the rise of AI and machine learning, it’s obvious this is the direction we’re heading in, but no less is the importance of choosing the right ecosystem and platform that benefits not just the banks, but the customer too.

We’re only human, after all.