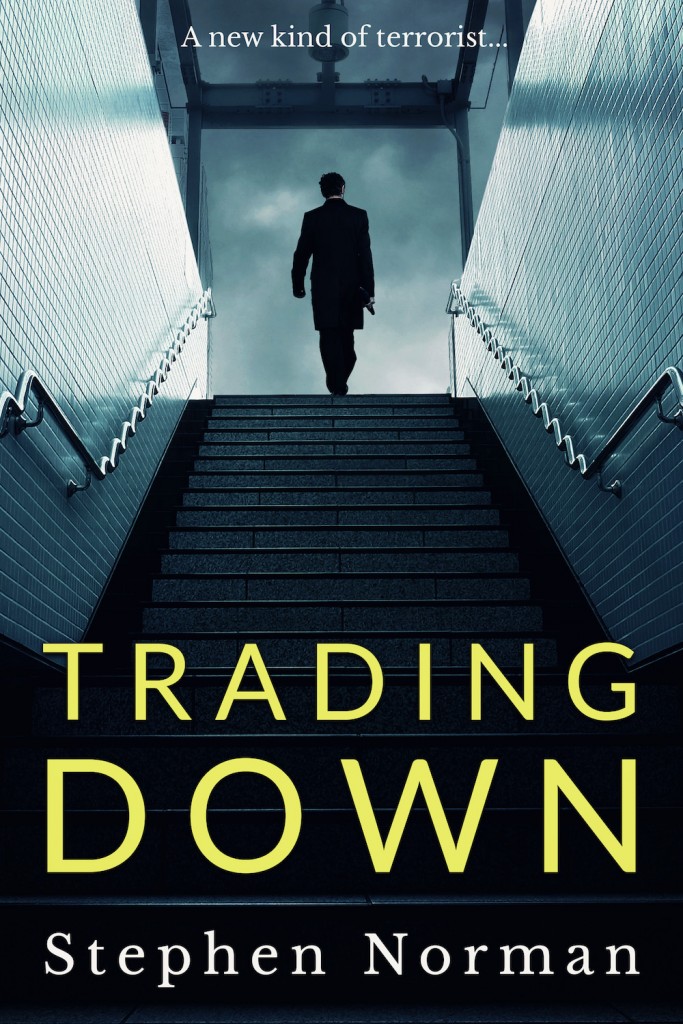 This chunky paperback arrived in the post the other day. Now, we don’t do novels at Banking Technology, as regular readers will know. We do white papers, case studies and research reports. But the cover was intriguing and I read a couple of pages. Then I took it home on the train. Pretty soon I couldn’t put it down. It’s just a great, surprising rollercoaster crime-thriller, set inside an investment bank under cyberattack.

The author is Stephen Norman, long serving CIO/CTO of RBS Global Markets and previously Merrill Lynch. This is his debut novel, being published by Endeavour Press on 9 November 2017. We thought you’d appreciate a sneak preview so we’ll be sharing some extracts with you. Here’s the first.

TRADING DOWN by Stephen Norman

Extract from the subsequent KPC investigation:

The new SBS datacentre [Hamilton] is located in a business park near the township of Parsippany, New Jersey, 27 miles west of Manhattan. It is the size of two football pitches and was built primarily to serve the needs of the Global Markets investment bank. It also houses the IBM mainframe computer which hosts SBS’s retail and commercial banking platform in the Americas. Hamilton was completed 6 months prior to the incident and incorporates the latest in automation and energy efficiency.

The datacentre space is divided into two halls, named Laurel and Hardy. Appropriately, Laurel is half the size of Hardy.

Hamilton is a ‘dark’ datacentre. The bank’s contractors visit to install and repair equipment as required. The only staff permanently on site are the operators (typically 5) of the TIS Network Operations Centre or NOC. This is in a separate room located within the building. These staff monitor systems processing across SBS’s datacentres in the Americas, 24 x 7.

It was almost midnight. Frank stood in the doorway of the Network Operations Centre (NOC) and sniffed.

“Jesus, you guys been eating chilli again? This place stinks.”

“Sweet enough ‘til you came in,” said Marvin, getting up. His shift was almost over. He landed a couple of punches on Frank’s Giants T-shirt. Frank weighed 250 pounds so there was plenty to aim at.

“Frank, did you step on dog sh*t on the way in?” said young John. “Would you mind checking your shoes? I don’t want to smell dog sh*t all night.”

John was new. Night shifts with John could be a pain because he was literal minded and talkative.

“Man, I hate those dogs outside,” said Luis. “We’ve got barbed wire and cameras up the wazoo, what do we need dogs for?”

“’Cos Neil Jenkins wants dogs,” said Marvin. “Anyway the smell ain’t dog sh*t, some joker sent us some chocolates, looked good but they smelled like dead rats and they leaked sh*t on the table. I told Mannie already. Where’s Karen? She late again?”

Shift change was at midnight, 5 minutes away.

“Sh*t, I don’t know,” said Marvin. “I’m s’posed to give her the key myself, you know? Can’t wait around, got my sister stayin’. What’s with that girl?”

“She’s got a new man, he likes a drink in the evening, that’s all.”

“Drinking is what you do after work,” said Marvin. “This goes on, I’m going to talk to Mannie.”

“I’ll look after the EPO key, OK?” said Frank. Reluctantly, Marvin unfastened it from his neck and passed it over.

There was only one EPO key and it was the shift leader’s badge of office. It never left the building, not even for a minute, and for good reason.

Datacentres are constructed by professional pessimists. Hamilton consumed vast quantities of electrical power, delivered by two independent substations on the New Jersey grid. The cables from those substations entered the building through different routes and led to different transformers. If this mains power should ever fail, the big generator would start up. If that generator faltered, there was a backup, ready to take its place, and a second backup behind that.

And if all these precautions disappointed, a second datacentre – with its own stack of duplication and redundancy – stood 43 miles away in Westchester County, ready to take over if Disaster Recovery (‘DR’) was invoked. The two datacentres were connected by three independent fibre optic links, so that even a 911-style attack with two planes could not disrupt the flow of data from one to the other.

The EPO key was a suicide pill, a murderous antidote to this litany of failsafes and redundancy. If the building was ablaze, and the massed firetrucks of Parsippany, Whippany and Morristown stood ready to hose it with water, the Emergency Power Off key gave access to a steel cabinet. Inside that cabinet were relays which would shut down the power, killing the generators, the chillers, the lights and every one of the thousands of servers inside, so the water hoses would not electrocute the fire crews. EPO keys were used only once.

“Not for us,” said Marvin. “The EOS batch is late again, Dave Carstairs and the equity boys been on a call for two hours now. Busy day tomorrow, it’s Triple Witching. OK, guys, we’re outta here, you all have a good night now.”

He raised his palm in farewell.

“My children, may the odds be always in your favour.”

The new shift – Frank, John and Luis – settled down in front the screens that monitored the Americas network and datacentres. The bank had three Network Operations Centres. The second NOC was in London, and the third in Chennai, India.

“When I started working, guess how many alerts we got a night?” said Frank.

“There were computers then?” said Luis.

“Weird, here’s another heat warning,” said John, “I’m sure I just saw one.”

“Mine is Laurel, Aisle C. Next door.”

“Hey Frank? Check this out. We’ve had 3 heat alerts, all in Laurel. Should we call McQuade?”

Frank hesitated. NOC staff were paid to monitor, not to touch. Property Services and their contractor McQuade did power and cooling, and IBM looked after the computers. Neil Jenkins had actually fired the head of the London NOC when he’d tried to fix a server himself. Jenkins hadn’t wanted the NOC inside the new datacentre – he wanted it in India – but the Americans had always had one. Paul Carpenter and the spirit of 1776 had defeated Neil Jenkins and his global agenda. So the NOC was built in the Hamilton datacentre, a little room for humans in the midst of vast, dark, chilly halls inhabited by machines.

“McQuade ain’t here,” said Frank finally, “and last time they took hours to arrive. So, Johnboy, you can go and take a look. Look, don’t touch. Take the radio.”

John disappeared. A minute later his voice crackled out of the radiophone on the table.

Frank and Luis looked at each other. A datacentre is a perverse building, a giant oven inside an even larger refrigerator. Computers consume electricity, and that electricity creates heat, lots of it. But heat is toxic to the computers that created it, and has to be removed by vast chillers, which consume even more power.

Warm was not good. Frank and Luis scrambled for the door and into the little lobby outside. They pushed impatiently through the glass turnstile and joined John on the polished floor of Laurel. The racks of the datacentre stretched into the darkness, lit by the pulsing LEDs from thousands of computers and network cards.

A healthy datacentre is not just cool, it’s also noisy. The noise comes from cold air rushing in, and warm air being sucked out.

Laurel was warm and quiet.

He walked down to the first aisle and inspected the grills in the floor. Then he walked back to the other two.

“The CRAC fans aren’t running. Could be something tripped. Power’s working, so it’s probably something stupid. I’m going round to the chiller plant.”

The chiller plant: an array of air-conditioning units that sat outside the computer halls. Not so different from the kind of aircon unit outside a suburban house, except in scale. Each chiller weighed 10 tons and was the size of a school bus. Chillers took in warm water and energy and supplied chilled water to the Computer Room Air Conditioning (CRAC) units inside the datacentre itself.

“Should we put out an Incident Report?”

“Let’s check it out first.”

Frank and Luis hurried back to the little lobby and Frank keyed four digits into a door marked “CHILLER PLANT: Authorised personnel only” and “Danger 1100V.”

“Frank, how come you know the code, man?”

“Hasn’t changed since the day they put it in.”

They arrived in a room built by a giant plumber. The pipes coming from the ceiling were two foot across and controlled by enormous valves. Frank stopped in front of a panel and pointed to the flow diagram on the side, all lit up.

“This tells you what’s going on. There’s the main pumps, there’s six of them. Wait… these three aren’t running and these valves are closed. Sh*t, I’ve never seen that before. These valves should be open.”

“Frank, should we be fooling with this? I mean, it’s not our job… we’re not s’posed to be here, even.”

There was a shout behind them. “Guys, guys, get back here! Quick!”

John was back in the NOC, looking at his screen. “Look at this.”

He paged back a dozen pages – the message was just the same.

Luis ran back to Frank in the chiller room.

“Laurel is in meltdown, Frank. All the computers are shutting down. We need to tell somebody quick. For Chrissake, let’s call Mannie. And McQuade.”

Luis ran back to the NOC. All the phones were ringing. John was on the phone. Luis called Mannie, who was in bed. Mannie was not happy.

“And what did McQuade say?”

“Er, we haven’t called them yet. Frank thinks he can fix it.”

“Frank? Frank’s fooling with the chillers? Oh my God. I’ll be there in 10 minutes. Get McQuade right away. Get an incident report out.”

The second extract from the novel will be published on our website 30 October 2017.