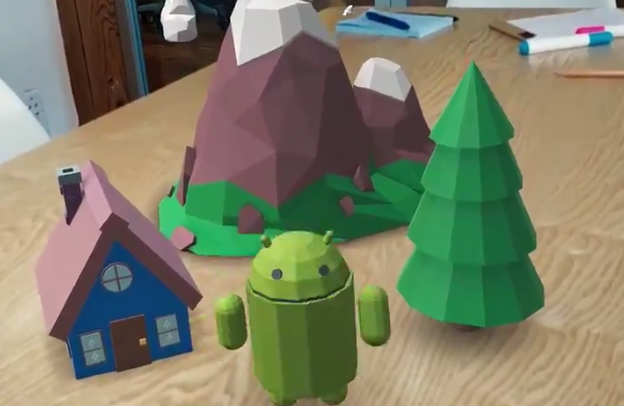 Say hello to my little friend

ARCore is the Android equivalent to the Apple ARKit; in short, an AR reality platform for developers. It’s not the first time Google has had a crack at the AR world, the Tango AR platform has been around for a while, but this one is built for the masses.

Right now it has been released as a preview, but before too long you’ll be able to see the wonders of AR on some more mediocre smartphones. This was the issue with previous attempts from Google in the AR world; it was too demanding. The hardware and software requirements meant there were few who could experience the wonders, but with ARCore, the team is targeting 100 million devices by the end of the preview.

Right now, ARCore works with the Pixel and Samsung’s S8, assuming the devices are running on the Nougat operating system, but this will be expanded before too long. The team has stated it is working with the likes of Samsung, Huawei, LG and ASUS to bring the AR experience to more devices. It won’t be too long before this begins to scale quickly.

AR on the whole has often been viewed as a poor man’s virtual reality (VR), and being completely honest, that is probably a true assessment of the situation. The technology is still complicated, but it doesn’t offer the same immersive experience. It also doesn’t have the ridiculous data requirements VR does, or for the user to spend hundreds of pounds on hardware. It might be a poor man’s VR, but accessibility is a much more promising trait than the bells and whistle. AR wins out here.

In terms of the specifics for ARCore, the team has chosen to focus on three areas; motion tracking, environmental understanding and light estimation.

The next step will be Visual Positioning Service. This is an idea which will take AR away from your table and into the wider world. The experience will be limited for the moment, but it might not be long until AR is on our streets.

If Pokémon Go can create euphoria, imagine what can be done now. Pokémon Go was billed as AR but it wasn’t anywhere near. It essentially imposed stickers on the real world. This is not AR, there was no interaction with the environment. But such developments could open up the app world.

How about this for an idea; streets without street signs. Imagine walking around central London and all the street signs were taken down, all the road marking taken off the street and billboards left blank. You could use your smartphone to find the street name, directions could be laid out on the pavement and billboards could be configured to your specific advertising preferences. It’s one step towards the movie ‘Minority Report’, but it’s a fun idea.

Or how about a horror experience where you have to navigate through a forest or abandoned house with your smartphone. There could be some serious nightmares hiding around the corner.