Weapons of mass distraction: worrying about the wrong fintech revolution

Reading the technology news these days you could be forgiven for thinking that some seismic revolution is occurring almost every day! Stories abound of Airbnb, Facebook, Uber, Alibaba taking over the world and demolishing our traditional business models – ushering in a new age where the “interface is king”.

The graphic below seems to pop-up in almost every event I attend lately to highlight the way these “disruptor poster children” are transforming the world we live in: 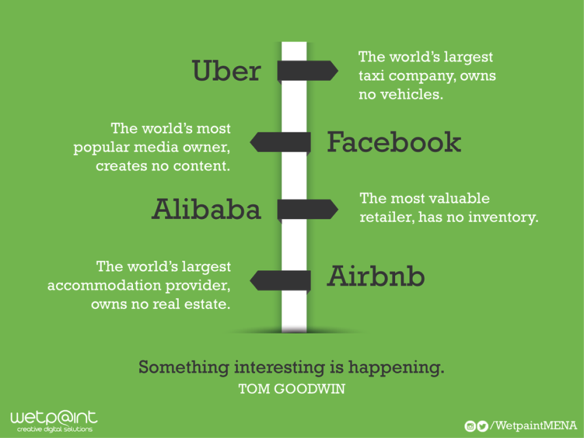 But just how radical is this transformation? Are these particular companies and business models impressive? Yes of course they are. Are they different and disruptive to more established companies? You bet. Are they revolutionary and game changing disruptors? I am not so sure…

For a start, although the proposition, perception or user experience may well look and feel very different and decentralised, in the background the data, control and crucially the money is very much centralised within the upstart brand – just as with any of the traditional large corporations that have come before them. In fact, in many ways these so called ‘disruptive’ business models are in reality even more centralised than traditional companies. They are a new breed for sure, but they are really a part of the existing system, rather than proponents of something totally new and revolutionary.

These companies have found a new way to attract fantastic valuations by shifting their focus from providing a service to their own customers (with associated costs and revenue) to simply acting as the interface between the customer and the service. The addition of scale, mobile and internet technology plus some clever marketing has been a potent mix but, ultimately it’s a more efficient version of a familiar model.

I believe these disruptor firms are really just a portent of a much more radical innovation that is still to come – which consumers are beginning to be ready for.

Peer-to-peer (P2P) lending, online/virtual banking, Bitcoin and other crypto currencies, the blockchain, and smart contracts all herald a serious move towards more radical decentralisation. Crucially with all these innovations the focus is not on a single proposition or brand but on changing the very infrastructure or eco-system which underpins the economics and which is technology-centric rather than profit or funding driven.

As large corporations such as the big banks for example, look towards well known entities such as Google and Facebook and fear how these giants may steal their clients in the future (think “Bank of Facebook”) they are perhaps less worried about blockchain or P2P technologies which have the potential to make these banks obsolete altogether! Many of these financial behemoths today are more concerned with competing with rivals in (albeit more modern) forms they already recognise in front of their noses, rather than worrying about these “weird” innovations on the fringes they just don’t fully understand. And this could prove a fatal error.

The real challenge in the next five to ten years will be identifying exactly which companies and propositions are true disruptors and threats and which turn out, in hindsight, to be a historical footnote.

For many companies, and sometimes whole industries, I fear the more obvious threats today (Uber, Airbnb) will blind them to the real danger posed by innovations which are much more revolutionary.