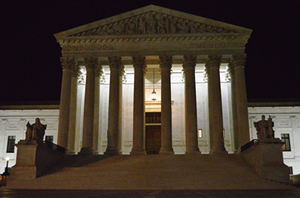 A long-running legal battle over ATM fees is heading to the Supreme Court, after the high court this week agreed to hear an appeal by MasterCard, Visa and a trio of major banks, which are challenging an antitrust lawsuit alleging they conspired to set anticompetitive ATM fees.

First filed in 2011 by a consortium of consumers, independent ATM operators and the National ATM Council, the suit alleges that the payment networks’ ATM fee policies suppressed competition by barring ATM operators from offering discounts to users who transact via networks other than MasterCard or Visa. The plaintiffs alleged that banks—Bank of America, JPMorgan Chase and Wells Fargo—agreed to the ATM fee rules when MasterCard and Visa both were owned by the banks as associations. Even after the payment networks went public, MasterCard in 2006 and Visa in 2008, the allegedly anticompetitive fee structures remained in place.

In 2013, a federal judge dismissed the suit, but it was revived in August 2015, by a three-judge panel in the Washington, D.C., appellate court, which ruled that there were grounds for the case to proceed because anticompetitive fee pricing made ATM networks more expensive for consumers to use. The average cost for an ATM transaction not tied to a user’s bank reached a record $4.52 in 2015, according to Bankrate Inc.

MasterCard, Visa and the bank defendants subsequently appealed the appellate court’s decision. The Supreme Court agreed to hear oral arguments and issue a ruling on the appeal during its next term, which begins in October 2016 and ends in June 2017. The court currently has just eight justices after the death of Antonin Scalia earlier this year. A deadlocked ruling would leave the appellate court’s decision in place, enabling the original suit to proceed.