Chips off the old blockchain 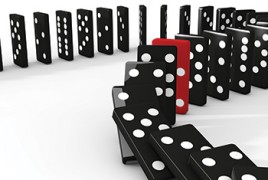 Financial institutions are clearly interested in the potential of the blockchain. Speaking to Banking Technology before Sibos, many senior financial services executives identified the blockchain as a key discussion point for this year’s event. Arindam Das, head of HSBC Securities Services, Middle East and North Africa, said: “Blockchain has a profound impact for the securities industry. It will be one of the key themes at Sibos and I want to learn more about it and how it will affect our business.”

For banks, the main appeal of the technology is that it can act as a system of record: reliable, granular and irreversible. While the distributed ledger could be applied to any number of areas in theory, one of the most promising in the near-term is immediate payments. The key to making that happen is Ripple, which is a real time gross settlement (RTGS) system, currency exchange and remittance network built on a distributed ledger. Launched in 2012, Ripple claims to enable “secure, instant and nearly free” global financial transactions of any size, with no chargebacks.

Swift and the blockchain

The Swift Institute, a research organisation supported by Swift and based at its headquarters in Belgium, is investigating a number of aspects around blockchain technology and cryptocurrencies. It also offers research grants on aspects of the blockchain.

In July, the Institute issued a call for proposals for two research grants, each worth €15,000. One is focused on the potential development of blockchain technology for use in the securities markets and the disruptive impact of such technology on the existing securities transaction environment. The other invites proposals for research on the business case for the use of blockchain technology in intraday liquidity management and reporting.

Also in July, the Institute issued a research paper, Bitcoin – the Miner’s Dilemma – which investigates Bitcoin mining pools and whether smaller pools will stabilise the Bitcoin system. Written by Ittay Eyal from Cornell University, the paper focuses on the inherent dangers of mining pools, an essential part of the Bitcoin environment.

Peter Ware, director of the Swift Institute says: “Bitcoin is a hot topic in the industry at the moment and our latest research gives interesting insight into the Bitcoin system using game theory to highlight potential pitfalls and suggest ways in which to improve overall stability of the currency.”

The paper says Bitcoin introduced the mechanism of an open distributed system that can be secured by requiring participants to present proof of work and rewarding them for participation. A natural process leads participants of such systems to form pools, where members aggregate their power and share the rewards. Mining pools enable small miners to operate with a reasonable business risk. However, when these pools grow too big, says the paper, they pose a great danger to the entire Bitcoin system. The dismantling of overly large pools is one of the most important and difficult tasks facing the Bitcoin community, it warns.

With Ripple allowing faster payments, other companies have seen an opportunity to capitalise on that in some of the more lucrative areas of banking. These include cross-border payments, of which global remittances reached $583 billion last year. For example, Earthport launched a distributed ledger service in August 2015, which ties Ripple’s near-time potential with Earthport’s cross-border payments service that makes international payments using local automated clearing houses (ACHs).

“Our view is that the real value [of blockchain technology] comes out in cross-border payments,” says Daniel Marovitz, formerly of Deutsche Bank and now president of Europe at Earthport. “With the addition of distributed ledger in our toolkit, users will be able to go to nearly instant payment. So rather than T+1 or same day, which is what happens in most markets, we will be able to do it within minutes.”

Earthport uses a combination of Ripple to record the transaction and its own prefunded accounts to provide the liquidity and the FX rate to make the transaction happen as quickly as possible. But the opportunity doesn’t necessarily end there. Joram Borenstein, vice-president at Nice Actimize, says other examples of the possible uses of the blockchain include faster settlement and clearing, stronger identity validation and time-stamping for compliance purposes. In addition, the removal of the human factor in settlement may result in lower costs, better quality and improved customer service as well as more transparency and trust.

The blockchain’s transparency and decentralised ledger have the potential to bolster financial institutions’ reputations, he says. “Identity validation is one application of transparency. Sharing basic identity information with a specific party would not disclose one’s identity to the entire world (the process for which can peruse the entire blockchain’s transactional history as it wishes) but can instil confidence in a specific party or individual who might otherwise not trust a given financial provider or counterparty.”

But perhaps the most compelling business case for the blockchain is the promise it holds as a means of compliance with the exacting demands of financial services regulators. Borenstein notes that regulators in the major economies have begun to weigh-in with regard to how these technologies will be regulated, taxed and monitored. “The technical underpinnings of cryptocurrencies and the blockchain infrastructure protocol represent a potential watershed change in how financial services products and technologies are used, distributed, monitored and regulated,” he says. While the changes that these technologies bring will not happen overnight, it is entirely possible that the way consumers transact, how their identities are verified and how financial institutions themselves interact, charge fees and more will undergo dramatic changes before the end of the next decade.

Banks and the blockchain

Having viewed cryptocurrencies and blockchain technology with deep suspicion in the early days of developments, financial institutions are now dipping their toes into the water.

In June, the UK’s Barclays Bank announced that it had signed a proof of concept with Safello to explore how blockchain technologies could be harnessed in the financial services sector. Barclays claimed this as the first such agreement between a UK high street bank and a Bitcoin company. Safello was founded in July 2013 and offers a Bitcoin exchange for users in 32 European countries.

In April, Bank of America convened a meeting at its New York office to discuss the application of the blockchain to foreign exchange trading. The meeting was attended by executives from several large banks. The work centres on startup R3Cev, which is building models that explore how banks can trade FX using the blockchain concept.

In July, Citigroup created its own digital currency based on Bitcoin, called CitiCoin. According to the bank, it now has three separate systems that use the blockchain’s distributed ledger. Although none of these systems is yet handling actual transactions, the bank is seriously testing the technology and its potential for use in various areas of the business.

The same month, Deutsche Bank said banks should seek to leverage blockchain technologies as part of a bid to defend their business models from disruption. In an online post by Deutsche Bank research analyst Thomas Dapp, the bank noted that financial entities including stock exchanges, credit card firms and clearing houses are all trying to leverage blockchain technology to assess whether it is a threat or potential benefit to their operations. In April, the bank responded to a request for comment by regulator the European Securities and Markets Authority, saying that the bank is analysing applications for blockchains and distributed ledgers.

In June, Goldman Sachs analyst Heath Terry said the distributed ledger may have “massive implications” for asset and ownership transfers. The bank put out a three-part paper focused on disruptive innovation in financial services, highlighting Bitcoin and the blockchain. It has also previously talked about the potential to use the blockchain for remittances. Earlier this year, Goldman Sachs co-led a $50 million investment in Bitcoin payments startup Circle Internet Financial. The company offers a digital wallet where people can store and make payments in Bitcoin.

“Traditional financial services organisations recognise the potential of these technologies and know they can’t be caught off guard,” he adds. “Those institutions that grasp these changes, speculate intelligently about how to work with them and ultimately are able to turn these ideas into new profitable business models, will be the ones that ultimately reduce the risk to their institutions and identify new sources of growth.”

Nevertheless, it would be naïve to imagine that the full implications of blockchain technology in financial services have been realised, or that every financial institution understands exactly how it will use the technology. Some banks are interested in using the technology beyond payments, in other areas such as capital markets. Whether the potential ever will be fully realised in these areas remains to be seen, since the industry is still at an early stage in the development of practical applications that can be used directly by banks.

“Will blockchain be as transformational as they say?” asks José Placido, head of client development and strategy at BNP Paribas Securities Services (BNPPSS). “There’s been a lot of talk about it in payments but what about its impact on securities services? It could be applicable.” BNPPSS is focused on analytics and reporting and Placido says regulators will have an interest in how banks approach this. “Clients will demand us to be much more digital and more comprehensive in our data. This is an issue that is raised in boardrooms and there is a lot of momentum behind it. We are all at phase one, investigating it and making recommendations.”

The uncertainty on the further implications of the distributed ledger feeds through into discussions between banks and vendors. Earthport’s Marovitz says many financial institutions are working on projects, the outcome of which they don’t necessarily know or even if the technology can be turned into a viable business tool. Obstacles remain to be conquered before the technology can become ubiquitous.

He says conversations with the main banks globally tend to follow a similar pattern: they agree that distributed ledger technology is interesting and that it might have a transformative effect on financial services such as payments and trade finance. They also have staff working on proofs of concept based on distributed ledger. However, none of them knows whether it will be able to migrate from proof of concept to live use of the technology with customers.

What holds back projects such as these is not difficult to discern: as with any new technology, banks want to be sure both that it will deliver measurable benefits and also that it will not invalidate their compliance. To take the cost first, the issue is partly circular. Marovitz likens it to purchasing a fax machine but having nobody else on the same network, in which case the ‘fax machine’ is nothing more than a lump of plastic sitting on a desk.

“It comes back to the business case and how quickly other institutions around the world will also come to a positive view around the business case,” he says. “That’s because the Ripple network, which is the distributed ledger technology that we are using, depends on there being a network. There needs to be a whole ecosystem of players out there that agree to use the technology.”

With Barclays, Bank of America, Citigroup and Goldman Sachs already exploring the uses of the blockchain, it may not be long before that time comes.