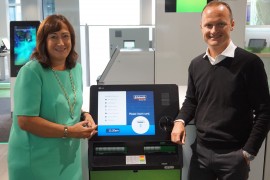 UK building society Nationwide has begun a £500 million project to improve its branch network using NCR latest generation of self-service ATMs. The project aims to bring the kind of self-service experience customers can get at supermarkets to the retail bank branch.

Nationwide will be redesigning the branches as well as introducing NCR’s SelfServ 91 ATM across 500 of its 700 branches. The new ATMs have several additional features, including cheque and cash deposit and bill payment as well as the standard cash withdrawal service.

“This is about empowering the customer,” said Barnaby Davis, divisional director for group retail strategy at Nationwide. “There is so much more you can do with an ATM now. This is part of a strategy that automates all of the day to day technical tasks that you would previously have done at the counter, freeing up time for staff to help provide advice, which is where they add more value.”

The new machine has a wide touch-sensitive screen  – big enough for two people to use at the same time, so that staff can interact with customers.  Nationwide intends to bring branch staff out from behind the glass screens associated with traditional bank branches and have them interact more directly with customers.

The first examples of the new ATM and associated branch re-design will be visible at Nationwide’s Croft branch in its Swindon HQ later this month. There will also be London flagship branches in Threadneedle Street, Cheapside, Tottenham Court Road, Victoria and Westfield Shopping centre later this year.

“Achieving the right balance and integration between digital and physical banking channels is a challenge for most banks and building societies in the UK,” said Rachel Nash, director of UK and ROI, financial services division at NCR. “Customer expectations are changing. Nationwide wanted to pull web services in. It’s connected to the other channels – historically ATMs would have had their own design team, but now they are much more integrated with the rest of the business.”

Earlier this year, Nationwide adopted NCR CxBanking software for its customer service in digital and physical channels. That deal involved NCB Connections and NCR Activate, which are intended to help Nationwide reduce the cost of ownership by cutting out legacy systems and streamlining duplicated processes, and bringing products to market faster. Nationwide has a ‘sprint’ group which is focused on innovation, within its Innovation Lab.

The building society has also said that, unlike other retail banking institutions, it will not be cutting its branch network. Instead, the society has plans to roll out video ATMs and other related technologies to make them more efficient. Banking Technology ran an in-depth feature on Nationwide’s plans for the future in the April 2014 edition of the magazine, which can be seen here.