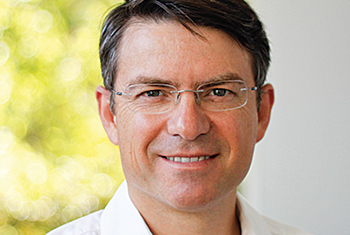 When first reports of an integrated communications project that had attracted a $66 million investment from a consortium of banks led by Goldman Sachs appeared last year, there was an element of cloak and dagger about the enterprise.

As well as having the magical Goldman Sachs name attached to it, Project Babel – not Babble, as some reports had it – appeared to be the latest in a series of communications initiatives in the investment banking space seemingly pitched against Bloomberg Messenger and other proprietary systems.

At about the same time, in autumn 2013, Goldman and others were also backing an open messaging initiative from financial information services company Markit. Significantly, Markit had enlisted the support of Thomson Reuters, whose Eikon Messenger has long been fighting with Bloomberg Messenger for supremacy.

The truth is both more prosaic and more interesting according to David Gurle, chief executive and founder of the company that formed the basis of Symphony – which recently took over the Markit open messaging project.

Gurle is a veteran of the messaging world, having worked on systems for Microsoft, Thomson Reuters and Skype. In 2011, he set up a new venture called Perzo with the intention of developing a new platform that would allow different communications channels to co-exist.

Some 18 months or so into the Perzo development, it crossed paths with Goldman Sachs, and one thing led to another. “We already had a number of opportunities we were looking at when we had a chance to meet with Goldman Sachs in January 2013 and there was immediately a very good chemistry,” Gurle says.

Within nine months the consortium of 14 financial firms had come together and the $66 million investment was set to transform Perzo into Symphony, which Gurle says is not setting out to replace proprietary systems.

“You have to look at what’s in existence and work on top of that, rather than try to replace it all,” he says. Bloomberg and Thomson Reuters both have messaging capabilities – “what Thomson Reuters has been doing is making sure that its user base can talk to other user bases stop, and the partnership with Markit was to do that. Bloomberg doesn’t do that, so it’s a closed versus an open approach.”

The web-based, cloud software-as-a-service Symphony platform is fundamentally different in that it interconnects natively not only with other messaging systems, but with other messaging modes: “With Symphony you can talk to email, to instant messaging, to SMS, to chat rooms, to Microsoft Lync … it brings the different communications modes that you use every day into one interface and interconnects where it matters to you,” says Gurle.

“The organisations that we work with have anything between 30 and 40 different messaging systems that they have to work with, and they have compliance on top of that – it has become a true Tower of Babel where you have different messaging systems that just can’t cope with each other,” he says. “The name came out of the fact that a symphony really is having a group of, not necessarily connected, people working together in harmony in a particular framework and that’s what we are working on. The symphony represents where we are heading.”

To some extent you can think of it as a front end to existing messaging systems, or perhaps an orchestration layer, but it also adds other functions that that the existing systems can’t do. “You can send emails directly from Symphony for instance, so it’s a front-end for the email systems, but there is also the ability to exchange structured data such as indication of interests or request for a quote,” he says. “Those are the kinds of things that we are communicating from Symphony that existing systems simply don’t support.”

This capability opens Symphony up beyond simple messaging. “There is a huge ecosystem of content providers and financial tech companies who see this as a vehicle and opportunity to distribute their applications and content to Symphony customers, and we certainly see that as an opportunity beyond what we originally envisaged,” says Gurle. Currently this ecosystem is still at the very early stages. “We are still in the process of working on this and hopefully will be able to announce the results of those interesting conversations in the near future.”

Symphony is also able to redirect messages to the most appropriate channel for the sender and recipient, which is one reason that Gurle thinks it will be widely used in terms of the communications flows within institutions. “Pre-trade conversations, asset managers, sales desks and so on will certainly be users, but it also works between the front- and middle-office and front- and back-office to synchronise information in an efficient organisation,” he says. “It is a tool that removes the artificial boundaries where if you don’t have the same terminal as me, I can’t talk to you – here everybody can participate and the price point is such that it can scale in a very cost-effective way.”

While pricing has yet to be made public, Symphony has a two-tier model: “We have a free version of the product available to anybody. It won’t have the full feature set of the paid version, and the difference is whether you are using it as an individual or as an enterprise,” says Gurle. “When you bring Symphony into your enterprise, where you need compliance and integration with your own applications, then you have a subscription fee per user per month. We have priced it in such a way that it is not going to be an obstacle for adoption.”

In terms of implementation, a beta is scheduled for end of Q1 2015 and general availability in early summer. “We already have a number our customers using what we call the alpha release of the application and we are getting very positive feedback and are working diligently to take that to beta,” he says, adding that, geographically, it will be global from day one. “We are rapidly scaling our organisation so that we can be present where our customers are,” he says. “Our customers operate in global markets and never sleep – from Japan to New York, you follow the Sun, so we are going to open locations in all of those parts of the world so that our customers can be up and running.”

From a regulatory perspective, there has been criticism about the way investment banks were using instant messaging and chat rooms for trading, with such systems featuring heavily in the investigations into Libor and FX rate fixing.

Gurle says Symphony overcomes this: “Our design goal from the beginning has been to marry together the data integrity and privacy requirements that our investors and customers operate under, so that no unauthorised people have access to the data that our users exchange, with the provision of a mechanism for customers to comply with various investigations, audits and enquiries from regulatory agencies,” he says. “With our technology you can do both at the same time, which is a unique asset.”

It is also not purely for the sell-side investment banks. “This is the start: we are talking to a number of other financial institutions who are not investment side of the industry in Europe and Asia. and on the buy side as well,” he says. “The interest is very strong and there is clearly a demand for a solution like this. Talking to future customers and partners keeps me very busy.”