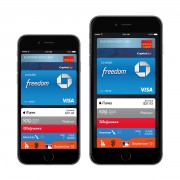 Apple may have lined up the chief executives of Bank of America and JP Morgan Chase to laud the launch of Apple Pay, but reaction from the wider industry was more muted – disappointed, even.

Currently announced only for the US, Apple Pay uses the Near Field Communications capability of the latest iPhone 6 smartphones to enable contactless payments using credit or debit card data stored in the Secure Element – a dedicated part of the phone chipset – and the Passbook application. It also uses the Touch ID fingerprint authentication of the iPhone.

A key part of the system is that card data is not stored on the phone or on Apple servers. “Instead, a unique Device Account Number is assigned, encrypted and securely stored in the Secure Element on your iPhone or Apple Watch. Each transaction is authorised with a one-time unique number using your Device Account Number and, instead of using the security code from the back of your card, Apple Pay creates a dynamic security code to securely validate each transaction,” says the Apple documentation.

American Express, MasterCard and Visa have all signed up, along with bank brands including Bank of America, Capital One, Chase, Citi and Wells Fargo.

The overall announcement left some observers cold, while others questioned the security aspects and pointed to the lack of clarity on how – and who – Apple will charge for the service.

“To be honest, I expected a more innovative new mobile payment system, simply because Apple has a track record of doing innovation better than anyone else,” said Ralf Gladis, chief executive of payment services provider Computop.

“What really leaves me unimpressed is the lack of ambition,” said Kieran Hines, practice leader, financial services technology, at analyst Ovum IT. “The future of mobile payments in retailing is all about using the handset both in-store and remotely to browse, get more product info, receive promotions, and place orders. Given things like iBeacon, I’d expected Apple would look to create some kind of slicker retailing experience, with payments in the background. The NFC piece has left me pretty cold, really because it’s a pretty bog standard NFC product and effectively not much more than putting a card into a mobile handset.”

Neil Garner, chief executive of Proxama, said that such additional services would come from other providers attracted to the ecosystem by Apple’s presence. “While Apple Pay will make the use of mobile payments more palatable and interesting to many more people, the really interesting thing about what the new iPhone’s NFC capabilities will bring is everything else the technology could provide beyond just payments. In particular, as we’ve seen through dozens of deployments of NFC payments and proximity marketing enablement for our customers like Barclaycard, Softcard (formerly ISIS) and media network owners like Clear Channel, location-based marketing and real-time engagement opportunities are made far more powerful,” he said. “Apple’s foray into NFC is a landmark and will ignite the mobile payments market globally. Apple Pay’s design interface and ease of use certainly helps this, but it’s all the other things beyond just payments that NFC technology offers to enhance consumers’ everyday lives.”

There is wide agreement that Apple’s arrival on the scene could be the catalyst for the wider use of NFC-based mobile payments.

“Apple has a global reach and it’s a clever move to join a global standard like NFC and take sides with global card organisations like Visa, MasterCard and American Express,” said Gladis. “Otherwise it would be an endless fight to convince and connect merchants to Apple Pay. To put it in a nutshell, by aligning itself with Visa, MasterCard, Amex and NFC, Apple ensures its users will be able to pay with multiple merchants globally, which provides excellent user experience. Provided that Apple Pay does not deviate from existing established standards, merchants won’t need a lot of integration work because it’s an established card payment.”

That’s certainly the view of the card schemes. “This is a big step forward. With Apple on board, NFC gets the final seal of approval it needs. This is a pivotal moment for digital payments and one that demonstrates the momentum behind mobile and contactless services,” said Steve Perry, chief digital officer at Visa Europe. “Apple’s formidable strength is in convincing consumers that they need something, so in that regard its support of NFC is a turning point for worldwide consumer adoption. It is likely to spark a reaction from Android and Windows phone makers who will want to ensure their devices match the innovative uses of NFC we expect from Apple.”

Perry also said that Visa Europe is “working closely with Apple and with our member banks to bring this new service to market in Europe”.

The security issue was raised by many – not least because the announcement followed closely on the heels of the apparent theft of celebrity photographs from Apple’s iCloud online storage service – but the use of the Secure Element and the tokenisation of the card information seems to have satisfied most observers that Apple Pay is ready for prime-time, though the fingerprint verification used on iPhones is generally considered

“With this announcement, Apple validates the data-centric security model and shines a spotlight on the need for the payment world to move on from vulnerable static credit card numbers and magnetic stripes to protected versions of data – tokenised payments,” said Mark Bower vice president of product management at Voltage Security. “Through the use of this data-centric security strategy, Apple Pay reduces risk of data breaches and credit card theft where it is supported. However, the world today is still in an early adoption phase with regard to new payment methods and mobile wallets, and retailers still have to contend with EMV and mag-stripe data and advanced threats.”