Since I was an eight-year-old boy sitting in my parents’ spare room in my dinosaur PJs, tapping away at my dad’s BBC model B computer trying to write a computer programme from a coding magazine, I have always wanted to create, build, and innovate. 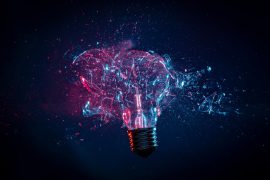 I loved that moment when you could see your creation come to life, and since that day I have always been excited by doing something totally new. It explains why I have been in technology for some 20+ years and I’ve spent most of that time trying to be at the sharp end of innovation.

However, just as much as I look forward to doing “new” things, as I have got older (some might say wiser), I find I spend just as much time looking back at technology and processes that have gone before. I believe I do this more as I get older simply because I have constantly observed and therefore learned just how innovation can fail.

No respect for the past

I first learnt this when I was implementing a telephone banking solution back in the last century. Yes, we’re talking pre-2000 here. Our challenge was we had a brand-new telephone banking solution that operated beautifully well, it just didn’t have the customers’ bank accounts or balances, payees, DD instructions, and so on in it. Essentially, the designers (I was just a junior software engineer then, I’m not that old) had no respect for the bank’s legacy systems. Instead, they wanted to build everything in isolation and build everything with the latest and greatest technologies. They failed to really understand that it was these unbelievably successful legacy systems that were the golden source of truth, and as such, their telephone banking solution had to play second fiddle to the good old mainframe.

The result was almost a total failure. Thankfully, in the 11th hour, someone worked out how to get the mainframe data into the telephone banking system in a way that didn’t compromise the telephony experience too much. This sounds all logical and rather obvious, but at the time, the focus was purely on innovating and delivering this telephone-based real-time experience.

My second thought around this is that innovations that have no respect for current systems or those that went before often end up residing in an innovation playground, isolated from the real world, isolated from the very area they are supposed to be innovating within. Let me give you a very real and current example. How many innovative projects have we seen around DLT/blockchain technology, all focused on payment-type capabilities? This can be stablecoins, settlement of some form of commodities, or even CBDCs. For the past seven or more years we have seen proof of concept after proof of concept after proof of concept. I have read time and time again how real cross-border innovation is only possible because of these leading-edge technologies, technologies such as DLT and CBDCs. Now, can you name one that is in production that has shown it can solve the very problems the innovation is supposed to be solving?

You see, it is very easy to sit in an innovation playground, disconnected from the real world, proving how a new technology or new innovative model can work to solve the world’s problems. But it’s in isolation. Can it really be utilised and brought in to solve that problem? Does it solve all the challenges/unanswered questions, or does it answer just a few? What’s the technical lift? What are the real benefits? What is the “WHY” behind that technology? What’s the investment? More importantly, what’s my return on that investment? When we ask these questions, we very quickly realise why these innovative solutions are still in an isolated playground – sorry, a formal sandbox. The simple fact here is innovation that cannot be quickly moved into the real world will often fail.

I learned this one the hard way. I started a mobile payment company pre-NFC, pre-Apple Pay, and just at the time the first QR barcodes were starting to really work via a mobile phone camera. Essentially, it delivered a brand-new payment infrastructure. A brand-new payment experience. The issue? Well, it was all too early for potential customers to understand. The technology worked and the benefits were proven. The issue was that it took too long to educate customers of the user experience. None had really scanned a QR code before, so the mechanics were too early and as a result required education.

Being too early is just as bad as being late in many cases. In this case, being some seven years later – when there are now numerous systems in the wild utilising QR codes – would have been perfect. There would be no education needed, only the customer noticing and enjoying the benefits. (I may even revive that concept at some point.)

Innovators stand tall on the shoulders of those that went before. This is true of technology also. Often, we see innovative solutions hampered by underlying technology failings or infrastructure. In the financial services sector, I have seen numerous fintechs over the years deliver innovative solutions, and yet they are at some point dependent on a wider underlying infrastructure that just isn’t fit for purpose.

In such cases, the entire proposition starts to unravel simply because of an underlying infrastructural failing. This is one of those reasons why Nick Ogden and I decided to build our very own clearing bank back in 2015. To ensure fintechs had underlying banking infrastructure that would work for them and that would allow them to innovate without compromise.

This one is probably the most frustrating reason for innovation failure: the time it takes to implement or time it takes for a buyer to stump up the cash.

When we think about implementation timelines, we have to be mindful of the customer’s buying cycle, their timelines, and the decision maker’s process. Sadly, in many organisations, it is all too often the case that decision makers are in seat for just a few years. These decision makers know this, so they look for solutions that deliver them quick wins. This means innovative projects often get overlooked simply because the perception is that innovation takes a long time to deliver (rightfully or wrongfully). This means you need to really ensure that innovation-based projects can be delivered in weeks or single-digit months. You cannot be dragged into a timeline that runs into a year or longer. If you do, you will simply fail to deliver.

And here is the worst one of the lot: the time it takes for your potential customers to agree a start date and to pay up. I have seen far too many good businesses with great innovative ideas and technology go into administration because their prospects just take too long to pay up. Often these are businesses that have LOIs or agreements to deliver for significantly bigger (let’s call them large) players. This isn’t unique to financial services, but it’s equally true. The issue is it takes too long to move from LOI and delivery to receiving payment for the service. The result? Great businesses with great ideas go into administration simply due to cash flow issues.

Sometimes, two forms of innovation come to the market at very similar times. One may be earlier but doesn’t move the needle as much as the other, which arrives only a little later. I call this the mini-disc moment…

For those of you who may not remember, when I was growing up, we used to listen to music via cassette tapes and vinyl records. I remember these days well. Then along came the laser disc. It delivered fantastic improvements in music quality and allowed for a larger number of songs on a single disc. But it was massive and didn’t really get a foothold in the market because it was soon adapted and matured into what we affectionately call the CD. The quality was much better than cassette or vinyl, and due to the compact size, it wasn’t long before every home stereo, car stereo, and personal music device was based on the CD. We enjoyed the CD for quite a few years, before…

Sony released the mini-disc. At first it looked awesome. A small disc that had the same quality of a CD but all the versatility of a cassette. It was considerably smaller than a CD and in terms of portability, a mini-disc player was so much better than a CD player. The mini-disc player was surely set to replace everything CD, and Sony would make a killing on its latest innovation. But… released at the same time was something known as an MP3 player. Sure, at first these MP3 players only held a handful of songs, and the experience of getting songs on them was shocking, so the mini-disc player started to ramp up in sales. But the MP3 player was evolving and improving quickly. Within a matter of months, a company called Apple released the iPod. Need I say much more? RIP the mini-disc…

I see this with numerous technologies/innovative companies today. They simply take too long to get up and running and too long to get to market or spend too long trying to prove their tech in isolation. The result? Something more innovative (or maybe not even as innovative, but easier to sell and get traction with) gets ahead, and by letting others get ahead, that innovation/company goes through its very own mini-disc moment.

When we look to deliver real innovation, we must consciously look at what has gone before, be mindful that legacy means success, understand the wider adoption of specific underpinning technologies and experiences, and then make sure we embark on something that can be delivered without running into years and years of development, thought, or implementation.