The story starts about three weeks ago. In Copenhagen. Over a drink at Nordic Fintech Week where one of my fellow speakers casually told me that his bank had a spectacular bit of swag lined up for their delegation attending Sibos two weeks later. 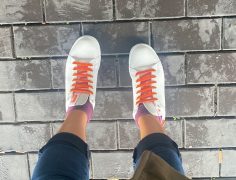 Always keep going. That’s the only way any of this work gets done.

A Stan Smith-style sneaker only with an orange lion where the green logo would normally be. Pristine white with orange laces. (If you haven’t worked out who they are yet, you need to get yourself a new career. Banking ain’t your thing. No offence.)

You understand… the minute I heard this… I needed a pair.

They are just for the team, of course.

It’s a very expensive and fiddly bit of swag to be handing out more widely.

So although I desperately wanted a pair and asked for one, of course (you don’t get to do my job for as long as I have without learning to ask for what you want, even when it is entirely unlikely that you will get it), I didn’t get one.

I didn’t expect to get a pair, you understand. Me saying ‘oh my god I want a pair’ was sort of my way of saying ‘this is the coolest bit of swag in the history of swag’.

Fast forward to Sibos week and the entire orange-lion-bank contingent are wearing those sneakers. And they are cool. They look good. They stand out from the crowd but in a ‘I would totally wear those all the time’ way.

In fact, I am wearing them right now. See what I did there?

How did I get a bit of swag that was not intended for anyone but the team? Not by applying for a job, if that’s what you are thinking. And not by sizing up people’s feet and knocking someone who looked like a good fit out cold in the ladies’ loo, as some of you suggested.

I got my very cool and very comfortable new sneakers exactly (and I mean exactly) the way we get digital transformation done inside big banks. Smooth segue or what?

The thing I wanted seemed entirely impossible, but by speaking the desire out loud, the conversation starts.

“Oh my god, what do I need to do to get a pair of those sneakers,” or “If we are really serious about digitising our capabilities in a way that reduces total cost of ownership and scales both to our existing reach and our ambitions, we should consider our underlying core infrastructure.”

You may not get to yes immediately.

You may not get to yes in your time in the organisation.

But unless you start the conversation, you will never get to yes at all.

Now, I was told that the sneakers were for the team only and I totally got that and didn’t ask them to find a way to get me a pair. But I did, every chance I got, praise them. Both as an artefact and as a branding idea. It was a good idea.

I always praise good ideas. Vocally and repeatedly. I have never known anyone to mind their idea being praised to be honest.

Part of the reason I do that is that humans don’t say good stuff enough to each other.

The rest of the reason is that, if our job is to advocate for change, we need to give it voice. We need to speak about the things people do that are interesting and different and inspired and daring and cool.

So yes, I praised the sneakers not ever expecting to get a pair…

I praised them the way I praised API-first product organisations to my CTO in the bank 10 years ago… and automated account maintenance to my CEO about three years after that. I got both of those in the end… but not via the direct route, not quicky and not for the reasons you may think. A bit like the sneakers, come to think of it.

And the point stands: voicing the thing is important. In life and in the work we do.

Speaking about the things you want or the things you admire or pointing out a good idea we should be considering for ourselves… like lowering our overall cost of ownership for the tech estate or giving me a pair of sneakers with an orange lion on the tongue… it’s important.

I was absolutely persistent with my love of the sneakers.

I was enthusiastic. I was effusive.

I am like that with new ideas, with good ideas and with things that are important. I also have a childish enthusiasm when it comes to sneakers.

But it was not about the sneakers.

It was a standing joke, a good-natured constant conversation backdrop. A door opener for other chats. An ice breaker. A rapport builder.

My love of the sneakers had a purpose even when I didn’t expect to get the sneakers. It opened a door to a personal, informal, human conversation alongside the serious banky ones.

But make no mistake.

I did ask. Again and again. But honestly, I didn’t expect to get. Me asking was a compliment to them and a way of consolidating rapport with a team that proved to be super interesting. In fact, me talking about trainers was an accent to an otherwise substantive and engaging set of conversations with a team that had some epic footwear and some great ideas to match.

A bit like, you got it, how we get our organisations going with the big, complex-beast ideas. Break the ice, talk broadly, focus on the things we can get over the line first, keep going.

Find ways to make it easier to keep going. Make it personal. That’s the only way any of this work gets done. It’s personal to all of us.

It’s personal to move off mainframes.

It sounds weird but look at the organisations that have successfully moved off decades’ old infrastructure and those who haven’t. You know what the success stories have in common? Someone inside their shop took this personally. Asked and asked again. Didn’t take no for an answer. Managed to stay on the right side of persistence (if you get too annoying you won’t get too far). And didn’t let the subject drop. A bit like me and these sneakers, really.

Even if success seemed dubious at most times. Even if they didn’t believe that they would themselves get it over the line. People like us put in the effort viscerally. Because we know of no other way to be.

And hey, look, sometimes you get somewhere. The door opens, the brick wall gives. You get things over the line.

And sometimes you get exactly and all of what you were hoping for, or in fact, in my case… more.

Because I genuinely didn’t expect to get the sneakers, much as I wanted them.

And that’s the last way in which me getting the sneakers is just like driving digital transformation inside a bank.

Ultimately, me asking again and again to anyone who’d listen is how it became known that I wanted them. The answer to how I got them, however, is: I made a friend who made it happen for me.

And more than anything, that’s the key to getting going, keeping going and staying sane both inside your transforming organisation and across this industry. This industry where the first answer to everything is always no.

Because those are the people who eventually find the way.

Find those people and walk with them.

I will be walking right there beside you all, every step of the way. In my new sneakers.