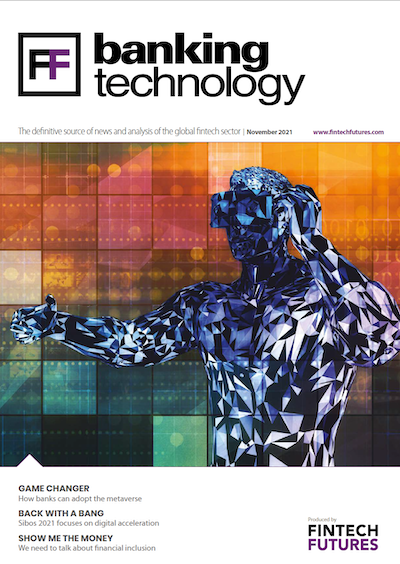 Click on the image to read the full edition

Cover story: GAME CHANGER – How banks can adopt the metaverse.

The recent month has brought some interesting developments in the core banking software space.

The UK-based newcomers (and rivals) 10x Future Technologies and Thought Machine have both reported deals with JP Morgan Chase. The bank’s newly launched challenger in the UK is powered by the 10x core banking system, while the US retail banking business has opted for Thought Machine’s Vault.

Temenos, a long-standing industry heavyweight, might be changing ownership, according to a Bloomberg report. Buyout firms EQT AB and Thoma Bravo are reportedly exploring potential bids for Temenos, Bloomberg says, which has a market value of CHF 9.8 billion ($10.7 billion). The rumours resulted in the vendor’s share price rise, but at this stage there is no guarantee a takeover offer will be made by either EQT or Thoma Bravo, or whether other interested parties come forward.

Finastra, another long-term resident of the banking tech ecosystem, has been reportedly looking for a buyer for its capital markets business. Barron’s reported earlier this year that the business produces $300 million in revenue. Judging by the recent deals in this space (e.g. Finastra’s rival Calypso Technology bought by Thoma Bravo earlier this year; Broadridge acquiring Itiviti Holding around the same time for $2.5 billion) Finastra’s capital markets unit could fetch 10-15 times revenue, which equates to $3-4.5 billion.

Around two years ago, Finastra’s owner Vista Equity Partners tried to offload up to 50% of its stake in the banking tech vendor, reportedly valuing the company at $10 billion at the time. However, the endeavours were shelved in spring 2020 due to the pandemic.

Who knows what industry bombshells 2021 still has in store for us!

In the meantime, we hope you enjoy the November edition of the Banking Technology magazine, which is, as always, full of fintech and banking tech goodness, including the top news, punchy opinions, food for thought, expert analysis, and lots more. We hope you find it interesting, informative and useful.