Describing itself as the world’s first “activist investment platform”, Tulipshare has launched in the UK with campaigns demanding changes at Amazon, Coca-Cola and Apple. 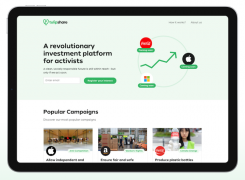 Tulipshare also plans to expand to the US market

Tulipshare says it endeavours to play a tangible role in promoting ethical change in the boardrooms of global companies by allowing individuals to “vote with their money”.

Through the Tulipshare platform, users can invest as little as £1 in selected US-listed companies. As activist investors, they can then influence the behaviour of a corporation by exercising their rights as shareholders.

The platform’s first causes include workers’ rights at Amazon, a focus on Coca-Cola’s contribution to climate change in the company’s plastic consumption, and right to repair issues at Apple.

New causes will regularly be added to the platform for would-be activists to begin fighting for change via the purchasing of shares.

Tulipshare founder and CEO, Antoine Argouges, says: “Our goal is to give a voice to the everyday individual, to encourage retail investors to rethink their investment strategies.”

He adds: “We want to shine a spotlight on the global issues no other investment platform has done to date, and, in turn, truly make progress in fighting the injustices committed by major corporations where, traditionally, major decisions are kept to a handful of individuals.”

To date, Tulipshare has raised $1 million in pre-seed funding from Speedinvest and high-profile business angels. The platform has been regulated in the UK by the Financial Conduct Authority and is looking to expand to the US market.