The elephant in the room

So. I may have shared this story before. But it’s worth repeating, frankly.

What we were trying to achieve

The train of thought that led us to getting Brian an elephant suit started with the cultural obstacles we needed to overcome to get higher levels of collaboration, innovation and engagement within our teams. And in a meeting that was frank, open and vulnerable with some very senior folks, we alighted upon the realisation that most of our teams were worried about things that seemed to be taboo to discuss. 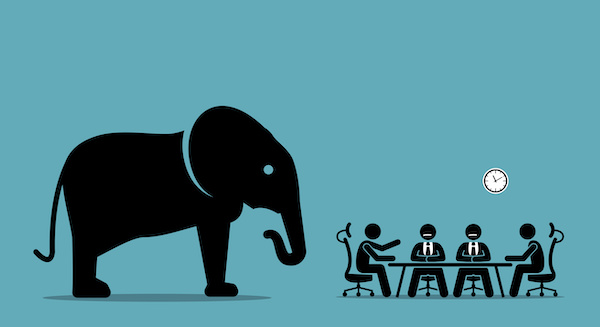 They didn’t talk about them to their bosses or management.

They talked about them to each other, working each other into a frenzy of worry and feeding off rumours and speculation.

Is this particular office about to close?

Is the “restructuring” over, can I stop holding my breath?

Does the future include me?

Will there be any chance of career progression in our ops centres? Because I don’t see it. Do I have a future here?

So some of the braver execs said: I will stand up and address these questions in a town hall. But what are the questions? Are we missing anything? What else is on the teams’ mind? What’s the elephant in the room?

If we are going to do this, let’s not assume we know the questions. Let’s ask.

So. How do we get to the questions?

Let’s talk to them.

And so Brian the intern found himself in a grey fluffy suit (it was his idea, before you ask. Genius Brian) and became the mascot and catalyst of one of the most incredible moments of renaissance in any company I have worked in. Because laughter melts ice and breaks barriers and why wouldn’t you tell the elephant in the room about the elephant in the room.

I mean, a company that goes out there to buy an elephant suit for an intern is trying, right?

The conversation started and not just through Brian but undeniably thanks to Brian.

We moved into a place of greater openness.

But as with every successful endeavour, we got more than we bargained for.

“Why are people staring at us?” I asked Brian.

I was mid-flow. I had been briefing Brian on what we needed to achieve for the rest of the day. We were crossing the Samuel Beckett bridge over the river Liffey on a glorious sunny day, I was talking at a million miles an hour as it was not a long walk and we had to go straight into a meeting and people were staring at us which was a little distracting.

Why are they staring?

Because I am wearing an elephant suit, said a baffled albeit intensely amused Brian.

I had gotten used to it. I was already used to my intern coming to work in an elephant suit. Amazing how quickly you become accustomed to things.

Should we be aware of that? Is that a problem? Will we lose the novelty factor before we achieve our end goal?

Not even close, said Brian.

He had been walking around the office in an elephant suit for a couple of weeks by then. In the time I had gotten used to him wearing elephant feet booties to work, he was experiencing something very different. People didn’t see him. People didn’t notice him until he went up to them and tapped them on the shoulder and then they jumped out of their seats because there was a lunatic in an elephant suit in the room.

And it didn’t just happen once or twice.

It happened a lot. Every day. Sometimes with the same people.

Folks didn’t expect to see an elephant in the office so they didn’t. A real life, Brian shaped version of that video with the gorilla walking onto that basketball pitch but you miss it because you are counting passes. All day, every day, for days on end, Brian was there in an elephant suit and people looked right past him until he spoke to them, actively inserting himself into their consciousness.

And of course the question becomes what else are they missing?

Bad habits? Upset colleagues? Colleagues upset because of the bad habits of the very people who missed the elephant?

What about strategic direction? Policy change? Business imperatives? How many times do we need to say things to catch these guys? How flamboyant does “leading by example” need to be in order to land with the folks who missed the fact that, for the past few days, someone had been walking the halls of the office with tusks and floppy ears on a ginormous head balancing on normal sized shoulders.

And I am not even going near the other elephant in the room, of how consistent you need to be in your values, conduct, strategy, messaging and general leadership for people to believe in its irrefutable reality, having registered it. When getting them to notice is hard enough, what does it take to believe?

Not everyone has a Brian in their team, willing to be the elephant in the room and catalyse conversations and learning. But everyone, no matter how good your culture or dysfunctional your organisation, everyone everyone everyone needs to address the elephants in the room, everyone needs to find ways of nudging the team to notice. To look around. To engage with what’s happening around them, even if it’s not always as exciting and it doesn’t always involve fancy dress.

And everyone needs to know what is ok, what is allowed, what is welcomed. You need to lead the dance of showing things are not off limits. And if you can do it with a bit of creativity, a bit of humour, lowering the stakes and opening up opportunity, you may be rewarded with a few more learnings than you bargained for and considerable insight.

What you won’t get is an overnight one-and-done miracle.

It got hot and stuffy in the elephant suit. But Brian wore it every day.

Finance didn’t know what code to use to process the expense claim for the dry cleaning bill of an elephant onesie and animal head, but we worked it out.

We brought an elephant into the office and still some people didn’t notice. But we kept coming back. Not always with an elephant but always with the awareness that this work is never quite done and all the more important for it.