A leaked internal presentation by Goldman Sachs titled “Working Conditions Survey” was posted on Twitter on Thursday. The slides showed answers to the survey detailing dissatisfaction among 13 first year analysts in its investment bank division, revealing long hours and a stressful working environment.

Inspection of the document suggests it was made by Hemal Thaker, a Goldman Sachs vice president based in San Francisco. CNBC reports that the presentation was drawn up by junior bankers themselves to highlight their issues.

The presentation, dated February 2021, notes that on average, “first year analysts are working over 95 hours per week and sleeping five hours per night”. The mean figure was 105 hours, which was the answer to the question “how many hours have you worked this week (ending 13 February 2021)?”.

It also showed detailed complaints from analysts of worsening mental and physical health, as per the slide below. 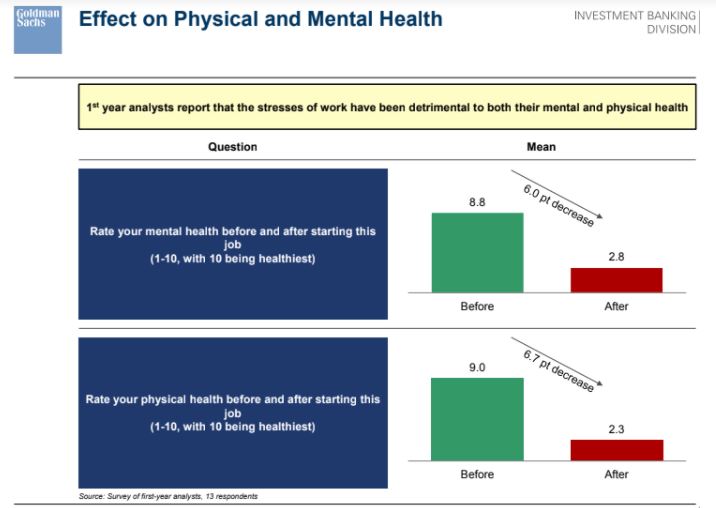 One slide labelled “select analyst quotes” consisted of feedback given by junior staff. It included:

“The sleep deprivation, the treatment by senior bankers, the mental and physical stress…I’ve been through foster care and this is arguably worse.”

“My body physically hurts all the time and mentally I’m in a really dark place.”

“Being unemployed is less frightening to me than what my body might succumb to if I keep up this lifestyle.”

“There was a point where I was not eating, showering or doing anything else other than working from morning until after midnight.”

“What is not ok to me is 110-120 hours over the course of a week! The math is simple, that leaves 4 hours a day for eating, sleeping, showering, bathroom and general transition time. This is beyond the level of ‘hard working’, this is inhumane/abuse.”

As well as gruelling hours, staff complained of mistreatment in the workplace. 77% of those surveyed said they felt they had been a victim of “workplace abuse” and 75% said they had considered counselling due to the stress of the job. All 13 said they had been given unrealistic deadlines, most reported being micromanaged, and 92% said they were frequently ignored in meetings.

“Junior bankers should not be expected to do any work after 9pm Friday or all-day Saturday without a pre-approved exception, as that is the only safe-guarded personal time that we get,” the document states.

According to Yahoo Finance, a spokesperson for Goldman Sachs acknowledged the survey and report. They say the conditions were linked to the COVID-19 pandemic and surging business at the firm.

“We recognise that our people are very busy, because business is strong and volumes are at historic levels,” a spokesperson tells Yahoo Finance. “A year into COVID, people are understandably quite stretched, and that’s why we are listening to their concerns and taking multiple steps to address them.”

The leaked presentation suggested setting a maximum of 80-hour work weeks and said guidelines around working hours “need to be respected”. Although it is unclear which offices the survey respondents were based, the European Working Time Directive provides for a right to work no more than 48 hours per week, which still applies to UK law. The US does not have any restrictions on working hours per week. On average, first year analysts are very unsatisfied with the firm, work life, and as a result our personal lives, as shown by the slide below. 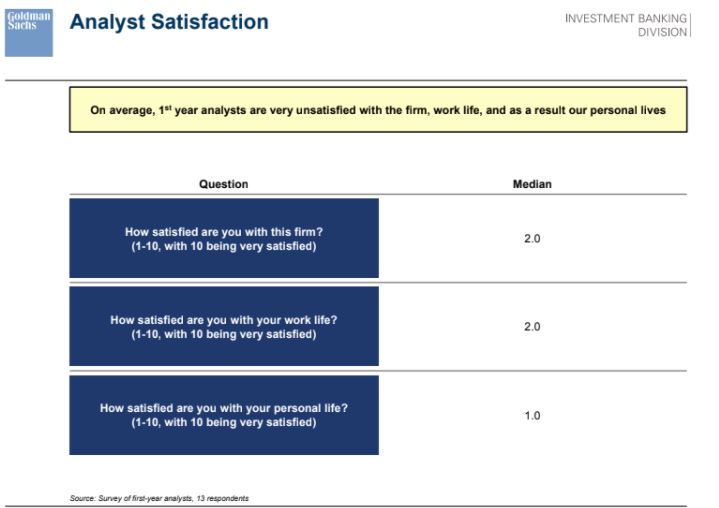 Last month, Goldman chief executive, David Solomon, recently rejected working from home (WFH) as a “new normal” and labelled it an “aberration” instead.

“I do think for a business like ours, which is an innovative, collaborative apprenticeship culture, this is not ideal for us. And it’s not a new normal. It’s an aberration that we’re going to correct as soon as possible,” he told a conference on 24 February.

This sparked debate on social media. One commentator on LinkedIn says: “Calling it an ‘aberration’ is a very interesting use of language with highly negative and arguably pejorative connotations of deviance.” Other senior execs in fintech highlight Solomon’s own hypocrisy, citing his own actions as revealed by a Bloomberg report. “Goldman Sachs CEO David Solomon pushed to get the power bank’s employees back in the office during the height of the pandemic, but spent his time jetting off to the Bahamas seven times in seven weeks on the company jet, according to Bloomberg,” writes a tech exec.

Solomon’s comments also stand in sharp contrast to that of many big names in the financial and technology space that have made the shift to working remotely a more permanent part of their operations.

According to FlexJobs data, Infosys will allow 33%-50% of its workforce to work from home permanently, while all of Square, Twitter, Coinbase, VMware and Shopify’s employees can work from home indefinitely. Others like Salesforce have opted for a tiered level of flexible working, while Capital One, American Express and Amazon will have staff working from home through Labour Day 2021.

The proportion of investment banks preparing to allow staff to work remotely for at least some of the time surged from 42% in June to 75% in September, according to a survey of 250 financial services organisations by technology company FIS.

Read next: Understanding employee experience will give banks a leg up