At least 16 Wirex customers have complained over unexplained account restrictions in the last nine days on Twitter, preventing them from accessing funds.

A handful of them have taken the issue up with the Financial Ombudsman, adding to those on Trustpilot who say they’ve done the same.

The Wirex app – when it’s fully working – allows users to buy, store, exchange and spend crypto and fiat currencies in a multicurrency account. It also offers a Mastercard, with 1.5% cashback on certain crypto transactions.

But a growing number of customers are fleeing Wirex over restrictions imposed for weeks at a time on their accounts, with apparently “no explanation”. 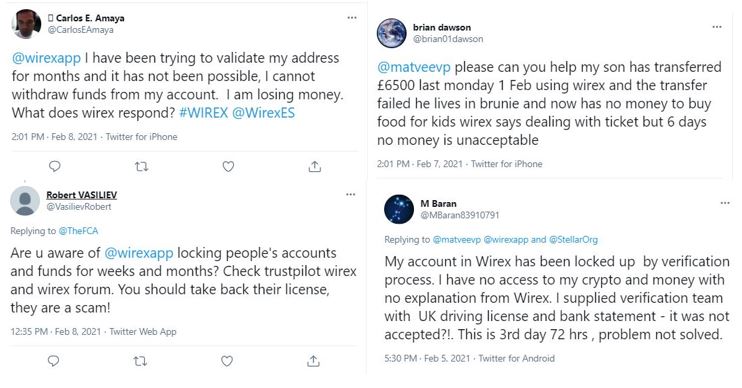 The worst cases include one customer having waited 246 days to get access to their account – and counting. Another told FinTech Futures they’d been waiting more than a year to get access to an account which held €20,000.

The customers which spoke to FinTech Futures did so under anonymity. One user had his account locked for a week. The fintech cited a need for “verification documents” he’d already sent.

Multiple customers on Trustpilot claim this “verification” process can take upwards of six weeks. “The ineffective support is killing all the advantages [of Wirex],” one said.

When FinTech Futures’ source regained access to his account, which held around €3,000, Wirex started over-charging fees on his transactions. He shared videos of the issue with FinTech Futures.

“They unlocked my account but made it impossible to withdraw more than €300,” he says. “I buy €500 LTC (Litecoin), they say it’s €5 fees, and [they] end up taking more than €10 without it being specified anywhere. You just see your money disappear.”

To transfer his money away to a different cryptocurrency exchange, this customer ended up paying more than €100 in fees. “It cost me a bit but at least I’m not depending on scammers anymore,” he says.

Another big complaint is over pending transactions. One customer on Trustpilot had £1,300 pending out of their Wirex account for more than three weeks, with no update from customer support on the whereabouts of the money.

Wirex customers on Twitter are beginning to corroborate the issues around account restrictions. Another customer, under anonymity, tells FinTech Futures “sending out funds is locked”.

“We can do anything except sending things out of Wirex. Customer support does not reply, or they say they will do something. But they won’t. In response to complaints, they just say it works”.

“Some folks, including me, started a complaint procedure at the Ombudsman. After this, we can move on to a lawyer.” Customers on Trustpilot also say they eventually resorted to higher authorities to try and reclaim pending funds or access to funds in their Wirex account.

One Twitter user claimed last week that their ticket had been sitting there for “over two months now”. “I need to chat with somebody [at] Wirex,” they write. “But [I] can’t use the chat because [my] account is locked without ever giv[ing] me a reason why.”

Another customer, Robert Vasliev, called on the Financial Conduct Authority (FCA) to take away Wirex’s licence. Wirex operates as a regulated electronic money institution (EMI) under the FCA.

The start-up claims its operations don’t apply to the Financial Ombudsman. FinTech Futures has reached out to both regulators to understand how they work together in relation to cryptocurrency firms like Wirex.

Earier this week, Alertify reported on the Wirex complaints too. It traced complaints back to December 2020.

But even as far back as February 2019, per a Reddit post, customers have been accusing the firm of locking their accounts “without reason”, claiming “Know Your Customer (KYC) issues” which “took weeks to fix”.

Upon approaching Wirex, a spokesperson told FinTech Futures: “Wirex is aware that there are some users that are experiencing issues after being locked out of their accounts. Unfortunately, to maintain the integrity of our checks, we often cannot disclose the full details of why individual accounts are blocked.”

The fintech then seems to point to a capacity issue in its right of reply. The spokesperson says Wirex is “receiving tens of thousands of new users”, “on top of” its “already existing 3.5 million” customers.

“These customers still need to pass the stringent KYC checks required by a regulated company. Meaning that some users may experience some delays with their transactions and verification.”

The firm also told Alertify that at the end of January the start-up turned off IBAN functionality due to a change in third-party providers. But the fintech didn’t quote this as a reason for freezing or restricting accounts.