Lock up your innovation department 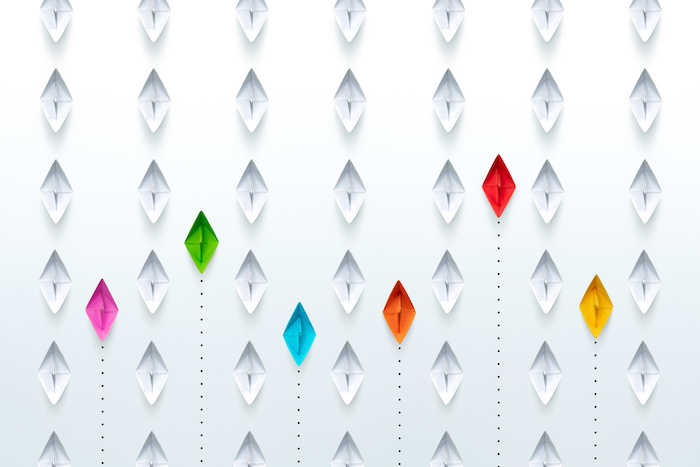 Perfect the art of incremental business improvements in the best, cheapest and most efficient ways, before the competition

We set up labs and innovation departments because we needed to learn how to learn. We needed a place and a team and a way of learning about new things without breaking anything. Understanding what these new things do, how we could use them, how afraid we should be of them.

But we have learned.

Amazing projects have started life in innovation departments and went on to become profitable products. Key pieces of infrastructure. And a lot of projects never saw the light of day despite being equally great. And don’t get me started on the drones.

We have learned how to learn.

We have not learned to always like it, but that’s not the job of the innovation department – there are limits to the magic the kids in the hoodies can bring. Some jobs are for the CEO to do.

Here’s your problem statement, these days.

If society has more technology and innovation than ever before, far beyond what it can possibly consume, what are the odds that your innovation lab will come up with the next big thing? Low.

Second question (bonus round): was that even the point?

Was the whole innovation malarkey not meant to be about helping your company stay relevant to its customers, competitive in its market and (if you are lucky) stand a chance of growth?

Because if that was the exam question (spoiler alert, it was) then the next best thing is not necessarily even relevant.

Who ever needed a smile-activated ice-cream vending machine?

Because one of us worked in an office that had one.

Someone or someones spent time and effort and money to build a vending machine that gave you a Magnum if you smiled. Great. It was fun. I made myself sick testing how toothy or genuine the smile needed to be to get the ice-cream (not very).

What does that prove about our abilities and applied creativity? What problem did it solve? What did it tell clients (whose projects were late) or staff (whose travel requests were denied on budget grounds) about our priorities and sense of importance?

A lot but doubtful whether what it said was what was intended. Because the message of “we are cool and totally get this” is the wrong message.

Hate to break it to those of you who enjoyed the fact that early day innovation departments had no KPIs or deliverables but innovation is not about the cool stuff. It’s about the useful stuff.

And before you say it, no, your investors know better by now.

And your employees know better by now.

If an innovation centre was a great employer branding tool ten years ago, now it is a sign that you haven’t taken much out of it for use in the wider organisation in the intervening time: tech, ways of working or funky colour scheme.

And yes having the best coffee machine in the building is always a plus but everyone can see past the post-its by now. And what they see is fear. Fear to commit.

They see a willingness to spend. Time. Money. Energy. Creativity.

But they also see the reluctance to translate success to business focus. That magical moment when you say, “hey it’s working”, and I am sticking by the assumptions I made about how business will work when I started this exercise.

And here is the first bitter truth of this journey.

We thought getting started was hard – and man… wasn’t it just – but actually keeping going was much harder. And sort of the whole point.

Innovation 2.0: the battle for focus

The world has moved on. It might be annoying to hear, but it has a habit of doing so.

Great things and terrible things have come our way and technology has shifted. Mostly towards simplification and reduced hardware.

But we are not sure you get how it works.

The world has moved on. And not just across the street.

It has changed its inner workings and trying to put familiar tabs on new things won’t help you make sense of them. And maybe that’s what your innovation department are doing for you these days but, if that’s the case, you need to meet them more than half way.

Are you aware that developers in your company are the people who make the most decisions throughout a day? Probably not.

And now you are wondering, wait, what decisions are we talking about here? How big?

And that’s the second part of our point.

We get that a bank wants to be identified with this fast-paced cool thing. But being part of it and making money from it are not the same thing and the first challenge for focus is remembering what the end game is.

Not to become a tech inventor but to stay a solvent, hopefully thriving, business.

The second challenge of focus is that, even ridding yourself from the pressure of invention, it’s still next to impossible to know where to look. So you pay people to look in all directions at once while you carry on as you always had.

And with hardware and processing power so cheap now (thank you, China!) and frameworks for innovation coming at you thick and fast, as fast as you have learned to say “fail fast” to your fellow bankers, it’s easy.

The real world is calling.

Only it’s not calling your name and focus is needed because what you thought was your choice… isn’t. This is happening to you.

It is happening anyway, with or without you.

Availability is through the roof.

Gone are the times when each generation could point to the seminal innovation of its time.

The “thing of the decade” is happening every second now. Are you even aware? And do you really think that your five guys in the lab will be your answer to this just because you sent them to South by Southwest (SXSW)?

The odds are against you and that is not even the point.

The point is, your company is already perfected to support, protect and run its current business models and channels. That is why your staff exists. So even when your innovation guys are right on the money (and they often are, trust us, we used to be them), the internal team they are trying to persuade has targets and habits and friends in compliance and are empowered to say no. A lot.

And as organisations are spending time they will never get back trying to work out if they are using the right innovation methodology while also denying its findings, we say innovation was what we called the team, not the function they were meant to achieve and if that’s distracting you change it but for the love of God: focus.

Even Google, always hailed as the ultimate innovation engine, has perfected the art of incremental business improvements in the best, cheapest and most efficient ways, before the competition.

This was meant to be step two, after the learning.

You want to call it innovation? Knock yourself out. But we call it business as usual (BAU). Because in a changed world, BAU is not the thing we’ve always done in a way that doesn’t scare us. It is the thing we need to do, in the way the world needs it, today. Which is different from yesterday and probably will be different tomorrow. That is why we needed to do all that learning.

And that is why the next big thing isn’t the ball game.

In our business, the tools will keep changing. So buy them. Working out what to do with them is hard enough and way more valuable, not to mention profitable.

And do keep an eye on different domains (including your own) for new stuff that actually gets traction in the market (not in those Big4 reports).

And do make sure your eagle-eyed market observers understand your business well enough to understand the value of what they see.

And that is not easy.

And it means your cool kids can neither go as far or as fast as they want, nor can they look for cool things with no usefulness to the business.

And it means your middle management has to deal with change and implementation plans and uncomfortable adjustments.

And neither of them will like it and it’s your fault because you made each of those groups a false promise: banks don’t naturally do RnD. Life doesn’t naturally do stability. And the status quo isn’t yours to keep. So you need to challenge it yourself before it is done for you from the outside.

Disruption, disintermediation those things are happening, you were right to fear them.

Learning how to learn is the right way to start on your journey of working what to do next. You were right there too.

But “next” is upon us and you should have learned by now that “next” in this game is always “different”.

Focus. On your business. On delivery. On successfully executing the right third-party innovations to accelerate your business. And unless that business is dairy, leave the ice-cream machine behind. Lock up the innovation department and toast their success, they got you here.

Now put a big D above the door and get the guys delivering.

You don’t have a talent issue. The team is fine. It’s a management issue. So focus and let them build.

They know how to deal with your in-fighting and bickering, they know how to keep pushing when things get hard and they know to measure success in terms of collective achievement not individual brilliance.

They also know success is not perfection and metrics are health vitals.

Let them run this thing: because they know winning here isn’t a gold star but continued, thriving survival. By whatever means the abundantly innovative market offers you so that you can better focus.

On your business. And your customers. Who were never going to be coming to you for ice-cream in the first place