Stripe launches BaaS-type service for merchants with top US banks 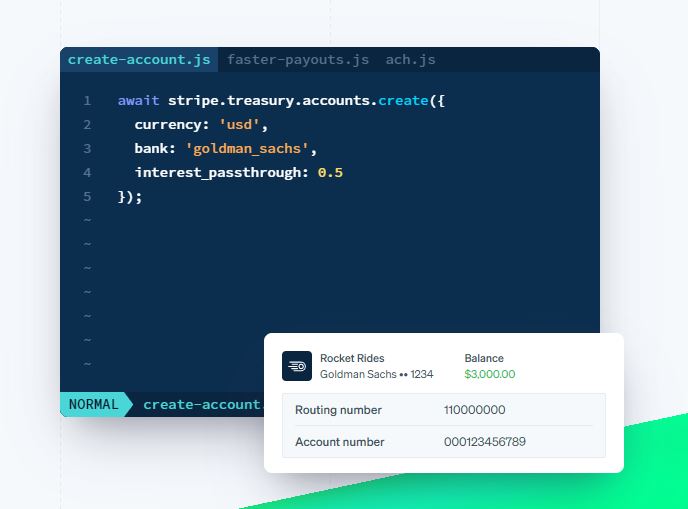 “[The] banking experience should be as easy as spinning up a virtual server.”

With the help of bank partners such as Goldman Sachs, Citi, Barclays and Evolve Bank & Trust, the fintech delivers the service via an application programme interface (API).

Stripe will be using this API to power Shopify Balance, the bank account for merchants which the Canadian e-commerce platform intends to offer its customers sometime next year.

The US payment firm’s offering, called Stripe Treasury, sees it offer something akin to Banking-as-a-Service (BaaS).

For Shopify, bank accounts will be provided with the help of Evolve Bank & Trust and integrated into Shopify’s platform using Stripe’s API. The bank partner enables the account to be interest-earning and FDIC-insured.

It comes with a dedicated card, the option for ACH or wire transfers, and bill payments.

The fintech calls the new product “a leap forward” for Stripe. “Offering a user-centric banking experience should be as easy as spinning up a virtual server,” says Karim Temsamani, Stripe’s banking and financial products head.

“That’s what we’re starting to accomplish at Stripe with our bank partner network.”

The fintech hints to more products to come, which will see Goldman Sachs directly involved. Citi cites its Virtual Accounts as part of its partnership with Stripe.

These accounts are designed for treasuries, to help them manage cash liquidity – something Stripe’s merchants will also find useful.

Citi also partners with Google. It just announced its bank account Plex, as part of a wider overhaul of the Google Pay app.

The bank was one of the US Big Tech’s earliest partners in launching the banking offering. Other incumbents, namely Bank of America, aren’t so sure of this model.

Bank of America’s chief technology officer (CTO), Cathy Bessant, spoke at Web Summit on Wednesday. She said the bank wants its own products to remain “top of wallet”, no matter the platform.

“Our strategy would be top of wallet no matter the wallet, versus the strategy Citi’s chosen,” she said.