Big tier 1 banks are complex companies. This complexity has been created over decades and there are many reasons for it: new products, new channels, acquisitions, geographic expansion, new customer segments are just a few. The picture below expands this a little further and, be warned, that this is an incomplete picture. 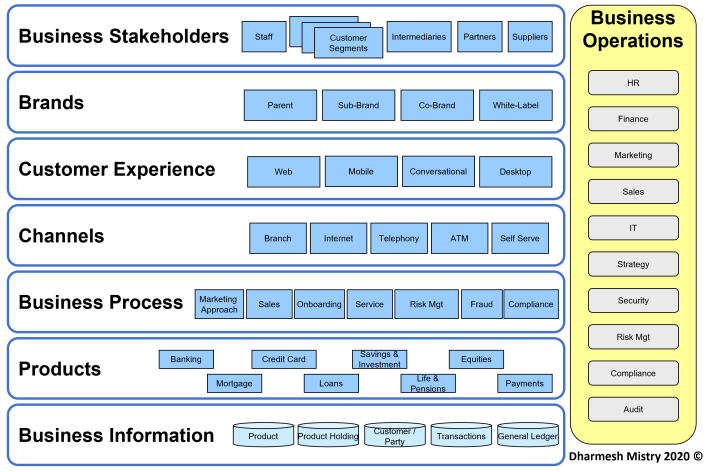 The key point is that any one of these layers may have its own technical architecture or even be a separate business. For example, under business stakeholders there could be customers segments for retail, corporate, wealth or capital markets and each one of those could be a separate business unit. Often a bank may create a separate bank brand to focus on a specific customer segment, for example NatWest has Coutts Bank as a brand for wealth management. The same is true for channels, HSBC created First Direct for their telephone banking and Co-op created Smile as a standalone branchless bank served through telephony and Internet.

It is not often you see a bank create a separate business for running a business process, but this can happen also. For example, some banks have provided outsource services like collections or mortgage processing for other banks. With Banking as a Service, I imagine more bank processes could be provided through a separate entity.

Either by acquisition or by design they have often had very separate organisations with their own technology solutions for different product lines, hence most tier 1 banks have multiple core banking systems handling different product types.

Imagine doing this across multiple countries and very quickly you start to see why some banks have become huge, why their technology stacks are complex and how customer data easily gets distributed. This illustration is a simplified view and for sure any one of those layers could be expanded with more examples, and further layers added.

This is one of the many reasons why banking is complex and will be hard to truly disrupt. When I first presented on digital some seven years ago, I used to show a slide with piranhas and sharks. I used to say that fintech’s were piranhas and that hundreds of them will take many small bites out of banks to disrupt them and that Big Tech (GAFA) would take large chunks out of banking. A huge amount has changed since but I’ve yet to see a bank that has folded because of fintech’s or Big Tech, instead we have seen a growing partnership between both.

However, we are now starting to see early growth of Banking-as-a-Service (BaaS), could this be the thing that upsets the banking applecart? I certainly think this will drive the biggest change in banking. When banks provided white-labelled services to retailers in the UK during they 90’s this only could be justified for the largest of retailers because of the cost and complexity of doing so. This cost/complexity is dramatically reduced with BaaS, such that even startups can create banking services very quickly and at lower cost.

Providing BaaS is an opportunity for banks that provide the service to other banks or fintechs, but it is also a very different business. For such a business a modern core banking platform fully architected in microservices is key to scaling, especially if a single code base underpins all tenants as opposed to running separate copies of the code for each bank.

For smaller banks and credit unions BaaS is also an opportunity, as cost and headcount could be dramatically reduced. However, as we have already seen, it also enables fintech banks to launch differentiated propositions to service niche customers segments. These services have banking embedded as part of the broader offering to that niche, making it difficult for banks to compete directly for that segment.

So, whilst we are several years into the digital revolution, we still have a long way to go. I’m not saying banks will eventually get eaten by fintechs and Big Tech – I’m just saying that whilst there has been a lot of change, bigger changes are yet to come.