Hoddle, a fintech savings app which recently graduated from NatWest’s fintech accelerator programme, has launched a beta version of its app in the UK. 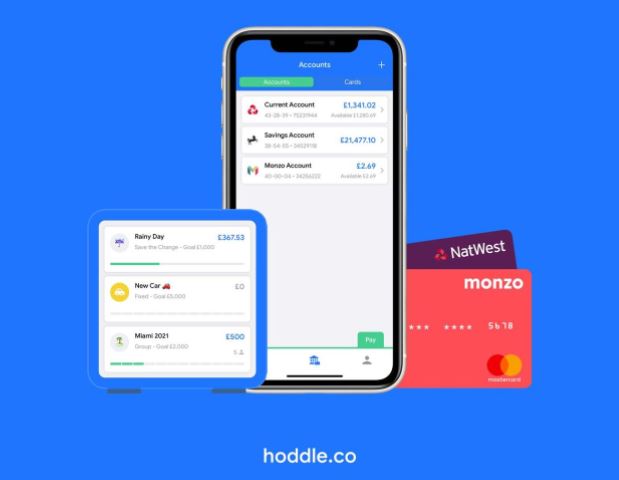 Around 6.5 million adults in the UK have no cash savings at all

The start-up, founded two years ago by mobile app developer, Sami Chaudry, allows users to save with family and friends.

A twist with all the trimmings

Its app, based on Google Cloud infrastructure, allows users to set-up “group holds”. Users scan the card they want to attach to the hold, and then Hoddle configures the shared savings pot – be that for bills, or a holiday.

Whilst this is the app’s most original feature, offering a twist on the more individual-focused savings app, it isn’t short of other services.

It also allows consumers to automatically save through “smart holds”, and save regular amounts through “fixed holds”.

Hoddle uses open banking to connect with more than 25 different banks. Just like a Google or Apple digital wallet, users can load up all their cards onto it.

The app uses machine learning and artificial intelligence to create transaction categories and filters. Users can generate their own links to get paid faster in a similar fashion to PayPal’s pay.me link, or Monzo’s monzo.me link.

Hoddle was brought onboard to NatWest’s accelerator programme by Steve Chown, the bank’s entrepreneur innovation manager.

Savings landscape in the UK

Founder Chaudry says Hoddle has been two years in the making. He feels “little is being done” about the fact adults are still struggling to save money.

Statista data also shows that around 6.5 million adults in the UK have no cash savings at all. A number which will likely – if it hasn’t already – increase as a result of the pandemic hitting the country’s most financially vulnerable the hardest.

But it’s not just a low-income issue. There is a significant gender savings gap too.

A report last year by Scottish Widows found that whilst average saving levels among women were up 4.6% since 2008, the gender savings gap remained “unacceptable”.

On average, men are still benefiting from an additional £78,000 in their pension pot.

In the current coronavirus climate, savings products and services offered by the big banks are falling short of expectations.

While 444 savings accounts match or beat the 0.5% consumer price index – which more than doubled in September – not one of these accounts is offered by a major name. That’s according to figures from Moneyfacts.

Read next: Afterpay signs up to Westpac banking-as-a-service platform