nCino prices IPO above price range at $31 a share

nCino, a maker of cloud-based software provider for financial institutions, priced its initial public offering at $31 a share, above its proposed price range of $28 to $29. 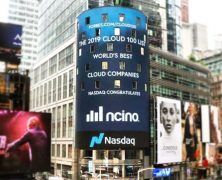 According to Market Watch, the company sold 8.06 million shares to raise $249.86 million on 13 July. The company upsized the deal from an original plan to offer 7.6 million shares and had increased its price range from a prior range of $22 to $24, suggesting strong demand from investors.

nCino shares started trading on Nasdaq on 14 July, under the ticker ‘NCNO.’

There were seven banks underwriting the deal, led by Bank of America and Barclays.

Proceeds will be used for general corporate purposes and working capital.

“We empower banks and credit unions with the technology they need to meet ever-changing client expectations and regulatory requirements, gain increased visibility into their operations and performance, replace legacy systems, and operate digitally and more competitively,” the company says in its prospectus.