In February, Varo cleared the final hurdle in its journey to securing a full national bank charter

Other participants in the round included HarbourVest Partners and Progressive Insurance. To date, the fintech has raised $419.4 million.

The fintech will use the fresh capital towards developing new financial products, and obtaining a US banking licence, which would allow Varo to hold its own deposits, as well as roll out credit cards, loans, and additional savings products.

“This new investment will enable us to complete the chartering process and leverage our modern banking technology to build on our track record of innovation and inclusion,” says founder and CEO Colin Walsh in a statement.

In February, the company became the first of its kind to clear the final hurdle in its journey to securing a full national bank charter. Varo is hopeful it will become the first and only fully digital bank to receive a US national charter.

Without a licence, the fintech has been offering its banking services with the help of Bancorp Bank to insure user’s deposits for up to $250,000 under the Federal Deposit Insurance Corporation (FDIC).

Payments company, Square, landed a conditional licence with the FDIC in March, but this is a slightly different banking licence to the one Varo has applied for, known as a special industrial loan company license which is designed for less traditional financial firms. 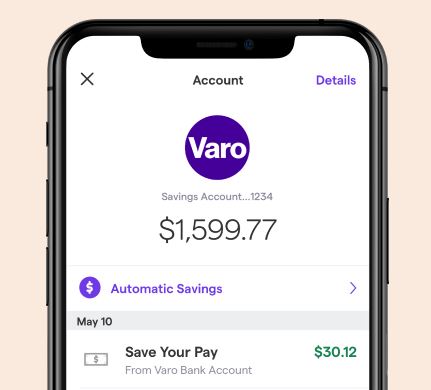 The challenger expects to land its licence this summer

“We look forward to partnering with Colin and the Varo team at this exciting stage as Varo transitions into a nationally-chartered bank and expands its product offering to better serve its growing customer base,” says investor Sachs.

Among Varo’s features, users can get paid up to two days early with direct deposits and can go overdrawn for up to $50 with no fees. The fintech also offers fee-free ATM withdrawals within its network, and claims to have one of the highest annual percentage yields (APYs) on the market.

In April, Varo expanded its partnership base to Dovly, an automated digital credit improvement platform. The move meant Varo’s customers could improve their credit scores, as well as gain access to a range of financial services including bank loans, credit cards and mortgages through the app.

In the same month, the challenger swooped in to absorb a pool of abandoned customers after Moven decided to shut its consumer accounts business. Varo crossed one million users last October, but the firm has not disclosed how many users it will gain from the Moven shut.

During the ongoing COVID-19 crisis, Varo has been providing users with direct deposits, early access to stimulus and unemployment relief funds, and has increased both its deposit and ATM limits.

Looking ahead, Varo will collaborate with investor Progressive Insurance on financial products, as the car insurance provider’s chief strategy officer Andrew Quigg says they will be “exploring a commercial relationship”.

The challenger expects to land its licence this summer, pending completion of the conditions of the OCC, the FDIC, and the Federal Reserve.