Jack Ma resigns from SoftBank Group’s board of directors

Jack Ma, co-founder of Alibaba Group, will be stepping down from SoftBank Group’s board after serving as a director for 13 years, as reported on TechCrunch.

Ma’s resignation will be effective on 25 June, the date of SoftBank Group’s annual shareholder meeting.

The company did not give a reason for the resignation, but over the past year, Ma has been pulling back from business roles to focus on philanthropy. Last September, he resigned as Alibaba’s chairman, and is also expected to step down from its board at its annual general shareholder’s meeting this year. 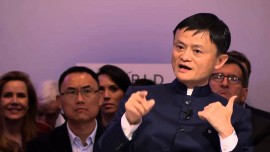 Ma’s resignation will be effective on 25 June.

Ma has a long business relationship with Softbank Group chairman and CEO Masayoshi Son. SoftBank was one of Alibaba’s first major backers, investing a reported $20 million in 2000, one year after the e-commerce company was founded.

As of a February 2020 SEC filing, it owned about 25.1% of Alibaba shares. Its stake in Alibaba is currently worth more than $100 billion, making it SoftBank Group’s most valuable investment.

See also: SoftBank to sell $41bn in assets to firm up financials amid virus outbreak

SoftBank has warned that it may not pay a dividend for the coming financial year for the first time since its 1994 listing, following an $18bn blow from the Vision Fund that plunged the Japanese group to a historic full-year loss, according to the Financial Times.

The conglomerate indicated it could sell as much as $11.5 billion in Alibaba shares as part of a $41 billion asset sale programme that was unveiled after SoftBank founder Masayoshi Son’s biggest bets collapsed amid the coronavirus market turmoil.

SoftBank reported an annual operating loss of JPY 1.36 trillion ($13bn) and a net loss of JPY 961bn — both its biggest ever — as it blamed a JPY 1.9 trillion annual loss for the Vision Fund.

In addition to its declining investment in WeWork even before COVID-19, the pandemic has wreaked havoc on other big SoftBank investments in ride-hailing and hotel groups including Uber, Didi and Oyo. That has resulted in the Saudi-backed fund generating an internal rate of return of -6% compared with its 20% target, with the value of 47 of its 88 investments written down.