Santander’s PagoFX to launch in Spring and rival TransferWise

Santander is in the final motions of launching its new fintech spinout PagoFX, which is set to rival the likes of online money transfer service TransferWise.

According to Sifted sources who were briefed on the launch plans, the bank has sought the help of external consultants including Deloitte which are helping the more than 50-person team based across London, Brussels and – mainly – Madrid. 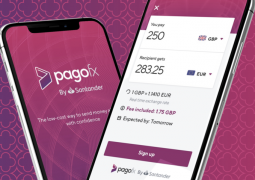 “We expect to launch in the coming months in the UK and plan to be present in more than 20 markets in the medium term,” Santander told Sifted, refusing to comment on a specific release date.

Initial markets the bank seem to be tapping – taken from the Twitter handles it has reserved – include Belgium, Spain, France, Switzerland, Poland, Belgium, the Netherlands and Germany. The UK Twitter, waiting list and website are all already live.

Announced in April 2019, PagoFX secured its UK regulatory approval at the end of last December, later than the bank expected according to Sifted sources. In order to operate across Europe, it is understood PagoFX is also applying for a Belgium licence.

As well as Europe, sources said the bank wants to tap the Mexico-US remittance journey, which TransferWise launched an exclusive business offering for last year. As well as challengers in the space, Santander will also come up against BBVA’s money-transfer apps Dinero Express and Tuyyo, which already serve the US and Latin American markets.

“We are building on an open-market solution for international payments that combines the price, transparency and user experience you would expect from a fintech with the trust of a solid and secure bank,” says Santander.

The bank, which has 145 million customers, seems to be riding in part off the skepticism it assumes many consumers still feel around new entrants into the banking space. Money transfer and remittance start-ups are beginning to populate numerous markets – TransferWise now has more than six million customers over 59 countries.

Challengers like TransferWise are successful due to their upfront ‘no fee’ attitude compared to seemingly more expensive incumbents, but something all challengers find difficult to maintain among their customers is regular activity and ‘stickiness’.

PagoFX’s USP seems to rest heavily on its cheaper prices compared to incumbents as well as being a ‘trusted’ name in the sector. It seems the main objective of the new venture by the bank is to stop more ground being lost to the likes of TransferWise.

So rather than being a disruptive, on-the-attack player like many start-ups have to be, Santander’s FX spinout will more likely take a defensive stance to stop more of its 145 million customers leaving for a better offer elsewhere.

The bank is also quietly working on Asto, its new small and medium-sized enterprise (SME) accounting app, somewhere in London.

Read next: Capital One announces US branch closures