N26 expects 70% of bank branches to disappear in 10 years

As the coronavirus forces more and more incumbents to shut the doors of their bank branches, digital challengers such as N26 are quick to jump on the opportunity to change customer behaviour for good.

“I expect that within the next ten years 70% of bank branches will disappear,” N26’s general manager of Germany, Austria and Switzerland, Georg Hauer, tells FinTech Futures.

“No matter what you prefer, you need to buy stuff online,” says Hauer.

“Obviously in some countries [this will be the case] more than [in] others,” he caveats. “But in such a situation as this [national lockdowns], it accelerates the realisation: ‘I don’t need my bank branch anymore’.”

The German challenger bank expects “certain fintechs will grow in this time of crisis”, largely down to countries such as Germany – traditionally cash-heavy nations – being forced to spend via digital channels only.

And with the World Health Organisation recommending the use of contactless payments, many other industry players have made similar assumptions about the shift in consumer behaviour from what is – for the time being – deemed as “dirty” cash, to safe online payments.

Germany’s largest lender Deutsche Bank was one of the major incumbents to announce the temporary closure of more than 200 branches due to the pandemic this week.

“No matter what you prefer, you need to buy stuff online,” says Hauer. “And we, as a fully digital bank, can offer that safer payment process at the moment.”

N26 is confident that this shift towards mobile banking, accelerated by the virus, will have “a long-lasting effect on the years to come”.

“It’s very likely that [consumers] will not go back to their old mode later on, because if they realise they can do everything without a bank branch – why would they?”

He said: “We assume that many people will open an online account because more and more bank branches are closing due to the coronavirus crisis. Online banking will become much more important.” 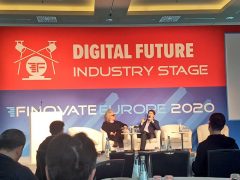 Hauer at FinovateEurope in February

Tayenthal said customer card sales for N26 had declined “slightly” in March compared to February, noting the greater shift was in what customers are spending their money on.

Although Hauer has not “seen a massive dip in business in any of our markets,” he has noticed a change in user purchases.

With travel at a stand-still in some countries, Hauer says train and plane tickets are quickly being replaced with “more Netflix subscriptions” and “iTunes songs”.

Not only highlighting the changes in N26’s consumer-facing business, Hauer also offers some insights into the bank’s internal operations since the crisis began.

“We’re probably in one of the world’s biggest work style experiments ever,” he observes. For N26, as a 100% cloud-based digital bank, the transition from on-premise to home environments has not been too bumpy from a technological side. 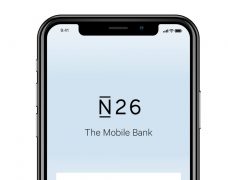 The sticking point for the bank has been its customer service teams. They need access to sensitive data which the bank would much prefer takes place in its offices, which span Berlin, Barcelona, New York, Vienna and Sao Paulo.

This has forced the bank to split its customer service teams into several office locations across Germany, wider Europe and the US to minimise the risk of a whole team being sent home if one employee becomes infected.

“We prefer to keep [customer data] completely in house,” says Hauer, who reveals the bank is preparing for ways to access the data from home.

“The data itself would not move, it will just be accessed on a different location,” Hauer clarifies, noting the various security hurdles N26 would have to overcome before making this happen.

Ultimately, N26’s architecture is a lot more flexible than the likes of incumbents, many of which still have to continuously tend to local server landscapes which are immovable.

Read next: UK challengers Revolut and Monzo combat claims they are going bust