My Money Jar, a Dublin-based fintech trying to curb people’s impulsive spending, has just closed $758,200 (€700,000) in a funding round led by Enterprise Ireland, a government agency which focuses on growing Irish start-ups globally.

The money came through the government agency’s ‘High Performance Start Up’ programme, which included a handful of private investors. The fintech has raised a total of $1.4 million. 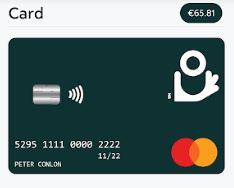 Founder Kevin Treacy, who had previously created a boutique post-production film house on Dublin’s seafront, decided to turn his had to finance in 2018.

The app, on iOS or Android, offers users an IBAN and a prepaid Mastercard. “It takes less than three minutes to create an account,” the start-up says.

The main feature – which is in the name – is the money jar. It allows users to set up various jars for coffee, rent, or mortgage deposits.

Jars can be locked by nominating a friend or family member and can be shared with others for joint savings and a temporary kitty.

Payments are processed through the app and can be automated to help users manage their expenditure more easily. 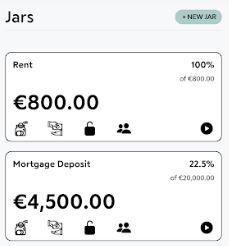 The start-up makes its money by selling through employers

“To date consumer fintech has only sought to improve their banking while also making spending and access to credit easier,” the start-up says.

“My Money Jar’s mission is to reduce people’s financial stress by increasing their ability to manage their money effectively.”

“The start-up makes its money currently by providing the service to users through their employers, firm in the belief that companies “are motivated to invest in financial wellbeing solutions for their staff.”

“In the future, My Money Jar will be available directly to anybody who wants greater control over their spending and saving,” the start-up confirms.

Michael Browne, a senior development adviser at Enterprise Ireland, believes My Money Jar has created “an innovative solution to the large-scale problem of people spending more than they earn”.

“We fully support their mission to empower a generation to better control their spending and create necessary savings habits,” he adds.

The start-up has approval from the Central Bank of Ireland to operate as a distributor of Prepaid Financial Services, which means it can act like an e-money issuer.