Barclays has announced the appointment of two new executives to its team in the Asia Pacific region. 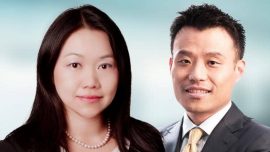 Carrie Chen has been hired as vice chairman of greater China banking, while Sung-Min Chung has been brought in as head of technology in banking for Asia Pacific.

Both will be based in the bank’s Hong Kong operations and be charted with strengthening Barclays’ senior client coverage in the region.

Chen brings over 15 years of experience in investment banking in China. She joins Barclays from Morgan Stanley where she was a managing director in China coverage. Before that, she spent time at Bank of America Merrill Lynch, Macquarie Group and McKinsey & Co.

Chung joins Barclays from iTutorGroup, where he was group chief technology officer. Prior to this he worked as head of technology, media and telecoms (TMT) for ZZ Capital International. He also spent time as director of TMT for Bank of America Merrill Lynch.

Vanessa Koo, head of banking for Asia Pacific and greater China at Barclays, says that the new appointments are a “clear demonstration” of the bank’s focus on the region. “I believe our new hires will significantly contribute to our already talented team in the region. as we remain committed to continue to deliver world-class solutions to clients in Asia and globally.”

Barclays has operated in the Asia Pacific region for more than 50 years. It pulled back on its cash equities business in the region in 2015, though it was described as a core market in 2017 by Jaideep Khanna, CEO of Barclays India, at that time head of Asia Pacific.

The bank agreed to pay $6.3 million in September 2019 to settle US charges that it has been flouting anti-bribery laws by hiring the family and friends of foreign officials in the Asia Pacific division.