There is also a discrepancy in the overall funding raised by European fintechs. Whilst Finnovating suggests the continent collectively raised $9.14 billion, Innovate Finance suggests it raised a lesser $8.5 billion.

If the UK fintech scene landed $3.9 billion in 2019, then it swiped 42% of all European investments in the sector. But if it did land a further $1 billion, then the country can comfortably say that 2019 saw it rake in more than half of all the continent’s fintech investments.

The Spanish report breaks down the performance of fellow European players. Germany’s fintechs were hot on the heels of UK competitors, landing $2.56 billion of what this research says was 481 European fund raises.

This means together, the UK and Germany raised roughly 70% of Europe’s overall funding total. Investment in all other countries on the continent never exceeded €1 billion.

The UK and Germany also dominated the the top ten list of fintechs which secured the most funding in 2019, only conceding to one company not from either country which was Sweden’s pay later fintech Klarna.

Germany’s payments fintech Wirecard heads up the list with an eye-watering $992 million from SoftBank, followed by UK fintech Greensill’s $695 million – yet another fintech benefiting from SoftBank’s investment. Out of the ten, five fintechs were from the UK, and four from Germany, although this included N26 twice for two separate fund raises within the year.

Innovate Finance’s report, which focused on global fintech performance rather than just Europe’s, found that the world’s investment in fintech decreased 28% in 2019 to $35.7 billion. It puts this down to a sharp fall in funding to Chinese fintechs. 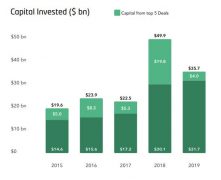 “Nearly all global regions saw an increase in investment aside from Asia, which decreased 73% from $28.8 billion to $7.8 billion due to a significant drop in large deals in China,” the report said.

This is a sharp change from its 2018 days, when China drove fintech funding globally with a staggering $14 billion fund raise by Ant Financial. But 2019 was the year of the US-China trade rift, and saw a seven-fold contraction in the country’s fintech investment according to a report by IBS Intelligence.