Amazon set to turn hands into cards with Visa

Amazon is building checkout tills which could see shoppers paying for purchases with their hands. By linking customers’ credit card details with their biometric data, the bigtech is set to turn hands into credit and debit cards.

The tech giant is said to be working with Visa to test the terminals according to The Wall Street Journal. Amazon, the owner of cashier-less Amazon Go stores and Whole Foods, is also in talks with card issuer Mastercard as well as banks JP Morgan Chase and Wells Fargo.

Despite declining to comment on the tests, Amazon has filed a patent for a “non-contact biometric identification system” which can be seen as a bid to copyright-proof the invention before anyone else creates it in the market. 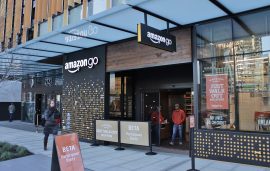 Silicon Valley start-up Pay By Touch introduced the concept of paying with your fingerprint in 2005, gathering hundreds of millions from investors to launch it. However, two years later the company saw its founder John Rogers file for personal bankruptcy. A year after that, the service was discontinued by its owner Solidus Networks, which later became bankrupt too.

“We could no longer support the biometric authentication and payment system as it currently exists, based on lack of funding and current market conditions,” the company said at the time.

Now, more than ten years later, the question remains – is this the right time for such technology to enjoy mass adoption? The technology Amazon is working on would require customers to insert their credit or debit card into a checkout machine and link it to a scan of their hand. Embedded cameras will then identify people by the shape and size of each hand.

Sources at The Wall Street Journal say employees are testing the payment method at vending machines in Amazon offices.

The accuracy of biometric data is still subject to some contention. Although it cannot be forged like more traditional security measures, there are worries that the version of biometric data stored by companies is far less accurate than the real, ‘in the flesh’ version.

Former Microsoft architect Roger Grimes told CSO Online last year that “while your fingerprint [or hand print] might be (nearly) unique in the world, what is stored and subsequently measured during authentication is not”. Instead of storing a highly detailed picture, companies hold “a measurement of various defining characteristics – called ‘points’ – of that biometric identity”, he said.

It is understood that Amazon will be using the data gathered from the hand-based checkout tills to charge advertisers more, capitalising on the more granular insights it can offer into shoppers’ habits.

Read next: Signicat CEO: The internet has destroyed consumer trust