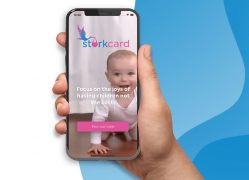 The London-based start-up has created a joint account called ‘StorkCard Village’ for parents to coordinate child-related spending between them and child carers.

Following the recent launch of its baby budgeting app, the 2018-founded start-up’s new joint current account allows both parents to add family, friends or other childcarers as joint account users.

Named “Helpers” in the account’s app, each non-parent carer gets their own card linked to the joint account designed to cover all childcare costs.

“Raising a child is becoming more and more expensive, but many parents find it difficult to ask for support because they don’t want to burden anyone with the costs,” says StorkCard co-founder CEO Bruce Pannaman.

In a bid to help parents avoid the “awkwardness” this burden entails, Pannaman says the new joint account can “manage the shock of child-related costs, which only seem to go up”.

Monese also launched a new joint account in the UK this month which it says is the “first” in Europe to offer cross-border capabilities.

“An increasing number of parents are using separate bank accounts but that concept becomes complicated once you have a child,” says fellow co-founder Andres Korin.